Posted on August 16, 2019 by The Splintering Staff 3 comments

Happy birthday SEGA Genesis! I know pretty much everyone interested in classic gaming knows about the original pack-in for one of the greatest consoles of all time… and most people do not have the nicest things to say about it, either. However, I am one of those who grew up pretty much from the dawn of video games, and I remember Altered Beast in a much different light than the general populace.

Yeah, so Altered Beast is not really remembered well these days, it seems. I understand how age takes its toll on all of us, but I think the big complaints stem from the fact that Altered Beast is not a very complex game, and the whole thing can be completed in about 20 minutes! Whether that is a valid “complaint” or not really comes down to the eye of the beholder, so if you need a combo fest, 50+ hour adventure to be satisfied, then you would likely agree with the naysayers. Altered Beast is a simple, short, ARCADE port, which I feel deserves a lot more credit than the naysayers give it these days! Yes, Sonic is the better pack-in, and SEGA did the right thing changing things up when Sonic did release. Still, Altered Beast representing the original bundle, just feels so representative of how I, and many other SEGA fans, saw SEGA in the 80’s and early 90’s… The GREATEST arcade game maker in the industry! 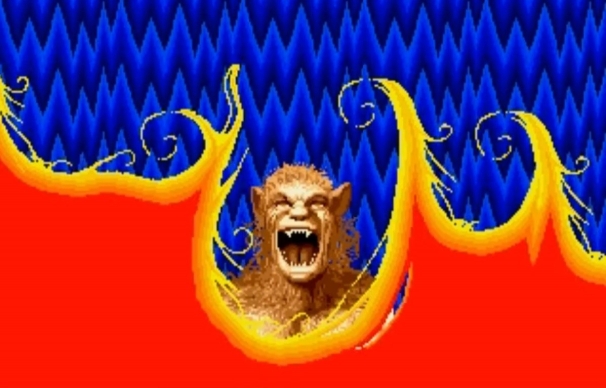 The werewolf transformation is the only one that looked like it actually hurt.  The other transformations simply flashed between man and beast.

Like so many other games of that time, Altered Beast was originally an arcade game. So, like most arcade games of the time, it was meant to be short, sweet, and satisfyingly repetitive! You needed to be able to walk up to a machine, be able to figure out how to play it, and then hopefully finish the game before all of your quarters ran out, or you had to leave the arcade. This goal here was to make the game different, fun, and just difficult enough to get you to pop in a few quarters along your journey to take down the game. (*sigh*) Yeah, I miss 80’s arcades, too!

When I was a kid, we grew up with the SEGA Master System in our house. We visited the arcade frequently, and would always drool over what was “possible” in the arcades, but just not available at home yet. I remember just how cool that attract mode of Altered Beast was! Watching those tiny little men beefcake themselves up with each spirit orb they pick up, ultimately fully transforming into whatever were-creature was featured on that specific level. There just wasn’t anything else much like it back then. Yeah, all you really do is punch and kick until your were-beast emerges, and then each creature has its own specific move sets that you get to enjoy until the boss of the stage is defeated… but those transformations were just so dang satisfying! I mean, you FELT like a total bad @$$ as you mowed over the baddies that gave you so much (or not so much) grief up until that point! It wasn’t very difficult if you took time to learn the attack patterns of the bad guys, and the limitations of each of your moves, but the style was enough to make up for it, and SOME of us LIKE short, easy games! I mean, you get more time to play other games, right? 😉

This picture was my favorite picture in the whole game!

The whole premise is pretty generic sounding. Zeus calls upon some dead Centurions to rescue Athena from the evil Neff, who apparently has sinister plans in store for his captive! I won’t spoil the “deep” story for you… Wait… Yes I will! Yeah, so it turns out that Neff is using the spirit orbs that you collect in order to turn into your bad @$$ beast man to transform Athena into a bird! Because… I guess Neff has a thing for birds… or a transformation fetish… or whatever his motive is, you can fill in the blanks! I did always find it interesting that he succeeds because you did all the grunt work for him without even realizing it! Sneaky bastard! But, if you are successful, then Neff is defeated, and Athena turns back into a… humanoid? I mean, do you know exactly what a goddess looks like? Whatever… NOT A BIRD ANYMORE! You win… but you appear to stay transformed as a golden (or silver, if you were player 2) werewolf! Hmmm… Now things really seem to be getting kinky! 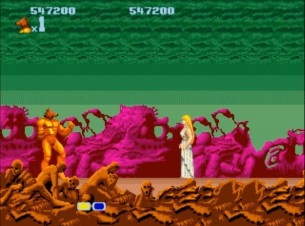 The bosses are really the highlight of Altered Beast! Each one was HUGE (for its time), and had to be taken down using strategies derived from your current power set. For example, the second boss is a giant plant with eyes that come out of it. You have to hit the center eye to hurt it, but since you are a dragon on this level (maybe…? I’ll get to that next.), you can position yourself in the right spot and just mash on the lightning shield move and kill the whole boss before he even gets a chance to think about hitting you! It’s a sweet feeling!

The weretiger’s flaming vertical kick was so freakin’ sweet!

Now for those who do want to play the Genesis version of Altered Beast, then there is a sweet code (remember those?) that lets you chose which beast you want to use for each level! Be warned, the bosses for each level almost always have a certain weakness to that level’s beast, but it is fun mixing things up! Hold Down and Left on the d-pad while holding down the A + B + C buttons and hit Start while on the Title Screen! There are a few more codes like for a sound test and how to continue on the last level you were on if you really get into it, but I’ll leave that to you! I mean, we have the Internet today! How jealous my 9-year-old self would be!

Bet you had no idea that the final boss of “Altered Beast” was that guy you didn’t recognize in the “bad guy meeting” scene in Disney’s “Wreck-It Ralph!”

As much as the story is lacking, and the game is short, and fairly easy, I think Altered Beast ultimately showed the world that arcade quality at home was no longer a dream for those little kids who were sad that Quartet in the arcades was so much better than the Master System “port.” What? You don’t know what Quartet is? *sigh* Fine! How about Teenage Mutant Ninja Turtles? Remember the difference between the arcade game and the NES game? That’s how it was in the 8-bit era. You got used to jumping by hitting buttons 1 and 2 at the same time. But Altered Beast ushered in the 16-bit era! A time of greater controls, arcade quality at home, and the greatest single gaming generation that the world has ever seen! If you missed out on it, then it’s not something that you can recreate unfortunately, so go on not “getting” how SEGA ever had a successful console that launched with such a “terrible” game. For those that do remember, then…

“RISE FROM YOUR GRAVE!”

Come on! I couldn’t write this whole thing and NOT say it! 😉