Posted on April 10, 2020 by The Splintering Staff 3 comments

The Death and Return of Superman takes its name from several DC Comics published in the early 1990s, namely The Death of Superman and Reign of the Supermen. The game is a single-player brawler published by Sunsoft and developed by Blizzard. Yes, that Blizzard.

As various incarnations of Earth’s greatest hero, you’ll battle through nine stages covering the plot that originally spanned dozens of comic book issues. Beginning with the uprising of the Underworlders and moving to Doomsday, the appearance of the four Supermen, the destruction of Coast City, and the ultimate return of the true Man of Steel. The Death and Return of Superman actually hits the high points of those comics fairly well. You even get some pretty, pixelized versions of Dan Jergens’ comic artwork to illustrate the story. Keen!

There is actually a disappointing lack of blood in this game

As mentioned above, The Death and Return of Superman (TDAROS?) is essentially a brawler with some Superman-inspired variation blended in, and broadly speaking, it works. Yes, Superman himself should be able to inflict more damage and take more punishment than he does in this game, but it’s important to confront this tragic reality head-on and move forward. If it helps, imagine that there’s some kryptonite… somewhere… or something.

The mechanics of the game are fairly standard brawler fare. Your Supermen punch, jump, grab, throw, and fire ranged attacks such as heat vision, missiles, energy blasts, depending on which incarnation of Superman you are playing. Oh, you can also fly by tapping jump twice. Any time you want. That’s awesome (though not always useful). All of these moves require you to use a six-button controller, by the way.

Littered throughout each stage are items you can toss at enemies, and like any good brawler worth its salt, you can also fling enemies into each other as well, or if you prefer, you can smash them into the destructible backgrounds which occasionally reveals hidden power-up items. You’ll need those.

“Play this in remembrance of me…”

The Death and Return of Superman is reserved for only one player, so for a brawler, it’s going to need to stay pretty fresh to stay interesting. Unfortunately, not every attempt to hold the player’s interest is successful.

On a positive note, over the course of the game, you will get to control five different versions of Superman, including classic, Cyborg, Steel, Eradicator and Superboy, but no, you won’t get to play as mullet Superman. I feel your pain.

The Eradicator is by far the most bad-ass of the Supermen, though Steel’s hammer ain’t too shabby, either

The character sprites are fairly large, and each Superman has unique move animations, though the abilities don’t function any different from one another. For instance, Superman’s heat vision functions exactly like Steel’s projectile attack. Your attacks do seem very quick and impactful, so you definitely will feel more like the Man of Steel playing TDAROS than other retro game incarnations of him.

There are also some neat touches in the player’s character animations. Speaking of Superman’s heat vision, for instance, if you hold the button down in anticipation of firing it, there is a cool red glow on Superman’s chest and shoulders as his eyes pulsate.

The enemies, however, didn’t get the same level of attention. There are a lot of repeated enemy designs, so many in fact, you’d almost beg the developers to do even more palate-swapping than they already did. This lack of innovation carries over into the stage backgrounds, which can repeat from stage to stage and are generally not very interesting. The music also repeats more often than I would prefer, which transforms what would otherwise be a slightly unremarkable but unoffensive soundtrack into a slightly tiresome one.

The Cyborg is the Judas Iscariot of the story… or is he the devil…? Uh… it’s allegory, dammit!

“Eat of this kryptonite, for it is my flesh…”

The designers at Blizzard did add a few touches to their stage designs which mixed things up. Superman will occasionally be forced to fly to scale buildings or fight airborne foes, and there are some side-scrolling shooter stages, too, though your character’s large sprite size can make it difficult to maneuver adequately, which is particularly noticeable in Steel’s flying stage.

You will believe a cyborg can fly

The fundamentals of combat are still interesting enough to keep you playing, that is until you reach the boss fights, which border on unfair. Each boss from Doomsday will wallop the kryptonite out of you, and each seems to have exactly the same insanely aggressive AI. My strategy ultimately became trying as best as possible to get through each stage virtually unscathed, then spam my unblockable special attacks on the boss, die, then use my invincibility time to land a couple of attacks, use up all of my special attacks again, die, and repeat until my last life. If you still need to chip away some of the bosses health after that, it’s possible to trap the bosses into a jump attack, jump away, jump attack, repeat pattern, which sometimes worked. It’s very difficult, but at the end of the day, it’s just not very much fun, either. 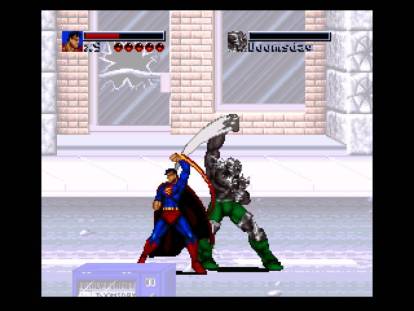 The SNES version looks a bit prettier, though I’ve not played it and can’t fully compare the two

For this is the day… that a Superman died.

While The Death and Return of Superman has several neat visual flourishes and gives comic book die-hards the ability to play through an iconic story, as a single-player brawler, it doesn’t finish as strong as it begins. Repeating environments, a frustratingly difficult boss AI, and poorly designed flying stages detract from what could have been a much more solid brawler. Some more variation in simpler things such as the backgrounds, soundtrack and enemy designs would have gone a long way, too.

That said, if we could have played as mullet Superman, that would have made up for it. All of it. (That’s a joke by the way. Don’t yell at me in the comments about how ridiculous that is.)

Ah, who am I kidding? Just leave a comment. Anything. Please.

Rejoice! Today, He is risen! (art by Frank Quitely)