Welcome back to The Splintering’s Monochrome May event! Today we’re cheating a bit on the whole “Monochrome” thing to feature Black and White Remastered, a completely redrawn and enhanced version of Art Thibert’s superhero comics originally published in the mid-90s by Image and made possible today by a successful crowdfunding campaign.

Written and illustrated by Art Thibert and co-written by Taylor Grosso, Black and White is the origin story of Black (aka Reed Blackett) and White (Whitney Sung), who find themselves embroiled in a hostile corporate takeover scheme with global implications. The titular duo is equipped with a pair of super-powered suits which gives them enhanced strength, agility, protection from injury, and a neural link which allows them to communicate telepathically. 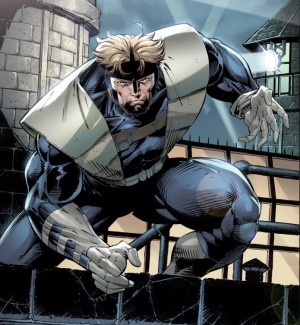 The story begins as Whitney Sung’s uncle Ye is kidnapped by the mysterious JC, a nefarious businessman who has the world convinced that he is a selfless philanthropist (SpOiLeRs! He’s really a dick). Reed Blackett is a former secret agent who had hoped to buy out Mr. Sung’s brewery in China, but when that business is interrupted by the kidnapping, Reed steps in to investigate the situation, and to protect Whitney from JC and his nigh-indestructible robot army.

Over the course of the story, Reed decides to bring Whitney into his inner circle, outfitting her with a suit similar to his own. The allusions to Black and White being akin to Yin and Yang is explicitly laid out in the book, as Reed is clearly the order balance to Whitney’s chaos. The two get along so poorly, in fact, and Whitney seems to be so completely unhinged, that it’s a little hard to believe that Reed would even consider partnering with her for delicate espionage missions.

There is a lot to love about Black and White‘s visual presentation, particularly if you are a fan of 90s-era superstar artists, among whom Art Thibert comfortably sits. Over the course of the book’s 54 pages, there is certainly no shortage of fast-paced action. Thibert’s artwork is stellar, particularly during these action sequences. Nearly every page is visually interesting and matches the pacing well, and only a select few pages seemed to be overburdened with expository text.

The writing itself also moves along at a steady pace. Other than the above-mentioned strained relationship between the two heroes, the character motivations are all clear enough. However, I did require a re-read to lock down exactly what the villain’s plan was, and how exactly Reed, the Sungs, and JC are all tied to one other. It’s not that complicated, but I just didn’t nail it down the first go-around. 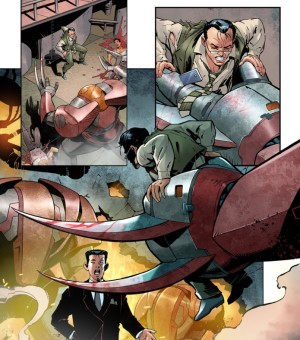 Cliffhangers: taking the “fun” out of crowdfunding

Since the book was crowdfunded via Indiegogo, you can probably expect a high level of production quality, and Black and White doesn’t disappoint on that front. The book has a nice form factor, complete with high quality paper and a perfect bound spine.

As this volume only collects the remastered edition of issues 1 and 2 of the original series, that means there is indeed a cliffhanger ending, just as serialized monthly comics are wont to do. But that brings me to Black and White Remastered‘s biggest flaw: that the crowdfunding model does not lend itself well to a serialized book like this.

One of the biggest reasons why people choose to “wait for the trade paperback” is because reading stories piecemeal can be annoying. With mainstream books, you may only have to wait a month or two before the next installment. However, the crowdfunding campaign for Black and White Remastered ended in October 2018, and with no sign of a second campaign currently in sight and with Art Thibert currently working on Chrono Mechanics, who knows when, or if, the follow-up will be launching? And most importantly, will the audience still be there when it does?

Overall, Black and White Remastered is a solid book and it’s beautifully drawn, but the crowdfunding model may not yield the best long-term results for the Black and White series if future installments can’t be delivered more quickly or with a more complete story. If Thibert eventually launches a second Black and White Remastered campaign that also includes an option to get this first book (and assuming that the second book does, in fact, close out the story arc), that may be your best bet for enjoying Black and White to the fullest. As it stands, I’d hold off on any eBay hunting for this one, at least until formal plans for the second book are unveiled. 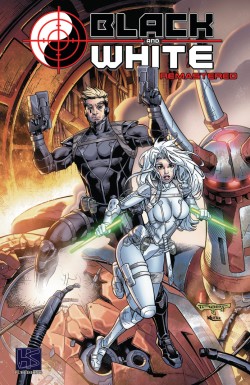 Thanks for reading! To check out more of The Splintering’s Monochrome May content, go here.