Posted on September 25, 2019 by The Splintering Staff Leave a comment

At the UN Climate Action Summit this week, the GRID-Arendal center special interest group published a press release stating that several video game developers and publishers including Sony, Microsoft, Ubisoft, Google, Rovio, Supercell and WildWorks had committed to a climate change awareness initiative known as the “Playing for the Planet Alliance”.

Among the commitments listed in the pledge are improvements to energy management, packaging, and device recycling, which all sound pretty straight-forward, but the agreement also includes a promise to insert new “green nudges” in video game design.

Here’s an excerpt from the press release:

Some of the biggest names in the video games industry, with a combined audience of 970 million players, have today formally committed to harness the power of their platforms to take action in response to the climate crisis. Combined, these commitments from 21 companies will result in a 30 million tonne reduction of CO2 emissions by 2030, millions of trees planted, new “green nudges” in game design, and improvements to energy management, packaging, and device recycling.

These voluntary commitments were announced today at UN Headquarters on the occasion of the UN Secretary-General’s Climate Action Summit. Under the banner of the Playing for the Planet Alliance, CEOs from 14 platforms and games makers, including Sony Interactive Entertainment, Microsoft, Google Stadia, Rovio, Supercell, Sybo, Ubisoft and WildWorks, were present to showcase their commitments. The Alliance intends to support companies in sharing learning and monitoring progress on the environmental agenda. 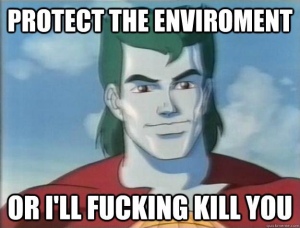 So what exactly is a “green nudge”? As it turns out, it’s an infusion of environmentalist messages into their video games. While it didn’t list the intent of all signatories, the press release did detail the plans of several game companies involved:

If this all sounds to you like the opposite of fun, you’re not alone. Even those orchestrating the initiative know this, which is why as part of the agreement, “many of the companies will host design-jams with their creatives to consider how they can mindfully incentivise better environmental outcomes within the games, without limiting the fun and enjoyment for players.” So if you’re someone who values video games as the creative expression of its developers or as an escapist form of entertainment, you could be in for a very rude awakening. Time will tell.

Even if you agree with the intent, is this really a road we want to go down? Why can’t we just shoot zombies in the face or stomp on an oversized turtle without political messaging being artificially injected into the gaming experience? 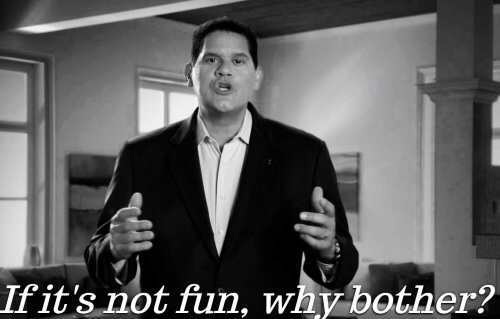 See? Reggie gets it.

It’s very likely that the motivations of the companies involved are good, but the cynic in me can’t escape the thought that this is merely a virtue signal expressed so that typically anti-business actors will direct their attention elsewhere, like paying a religious indulgence or cancel culture mob protection money.

To be clear, I don’t particularly care what a company does with my money once I’ve purchased their product. They can use it to plant a tree, stuff it in a stripper’s G-string, or even burn stacks of it in their backyards. But whether your pet cause is environmentalism, family values, or non-binary, paraplegic leprechaun awareness, I still think it’s best to let developers express themselves without corporate-born political messages injected into their video games.

At least I have my girthy game backlog to fall back on if this gets really out of hand. That N64 copy of Jet Force Gemini is around here somewhere….

*Note: this post was updated to clarify it as an editorial/opinion piece.