Posted on June 4, 2018 by Blake Worrell Leave a comment

Limited Run Games announced last week that it will hold its own press conference during E3 2018 to take place at 3pm Eastern Time on Monday, June 11. 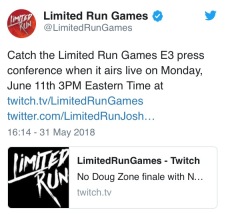 This is the first time the North Carolina-based publisher will hold its own press conference, though LRG had a presence at E3 in previous years, including announcing 17 new releases at E3 2017.

LRG has worked with a number of smaller gaming studios to release physical copies of their games, including indie titles such as Shantae: Risky’s Revenge and Shadow Complex as well as retro revivals such as Night Trap and Wonder Boy III: the Dragon’s Trap.

You can watch the Limited Run Games press conference via their Twitch channel here.