NGDEV recently announced that their “Eurostyle platformer” Gunlord X is coming to the Nintendo Switch eShop on 22 May.

Originally released as Gunlord for both the SEGA Dreamcast and Neo Geo in 2012, Gunlord X an enhanced port of the original featuring quite a few tweaks and updates to round out the package. The game looks to take significant inspiration from not only retro European platformers like Turrican, but also features shoot-em-up segments akin to the Thunder Force series or Lords of Thunder.

Below is an extensive launch trailer and a breakdown of Gunlord X from Nintendo.

Gunlord X is a Eurostyle platformer with emphasis on exploring huge worlds and blasting off enemies. Jump! Shoot! Explore!

Welcome to Gunlord X, a vastly improved Gunlord port coming to Switch in 2019!

This game features 11 stages of exciting 2D game play with over 60 unique enemy types. Blast yourself through giant landscapes, explore caverns and reveal all secrets!

The critically acclaimed platform action game Gunlord developed by NGDEV in 2012 comes back to the Switch in 2019. The game received an intense “Hi-Bit” overhaul for modern game consoles in a widescreen format. Additionally new boss enemies and extended stages were added.

In the early 90s, this is precisely what I thought the future of gaming was going to look like. It’s nice to see that I wasn’t 100% wrong.

Gunlord X will be available on the Nintendo Switch eShop on 22 May for $9.99. 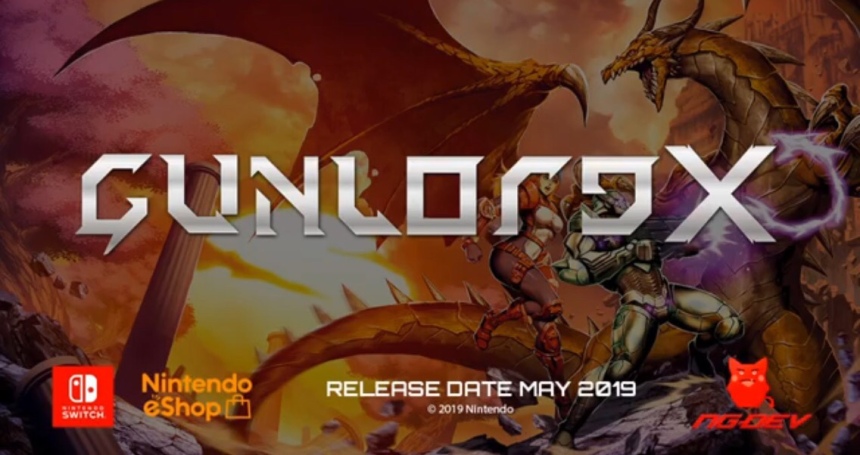