Yesterday during Twitch’s E3 2019 coverage, Konami revealed their plans to jump on the mini-console bandwagon with the TurboGrafx-16 Mini. You can watch the full reveal trailer below.

The console will ship in 3 different versions depending on your region, with the TurboGrafx-16 Mini coming to North America, the PC Engine Mini in Japan, and the PC Engine CoreGrafx Mini in Europe.

Along with the console itself, Konami announced the first six games that will be included (which also vary by region). For the North American and European versions, the games include R-Type, New Adventure Island, Ninja Spirit, Ys Book I & II, Dungeon Explorer, and Alien Crush. Japanese gamers will be getting The Kung Fu, Super Star Soldier, PC Genjin, Castlevania: Rondo of Blood, Ys Book I & II, and Dungeon Explorer.

The game lists confirm that the TurboGrafx-16 Mini will include not only “HuCard” titles, but also games released on the CD format, as well. The console will also include features typical of other mini consoles such as save states.

The PC Engine launched in Japan in 1987, with the U.S. TurboGrafx-16 release following in 1989. Konami acquired Hudson Soft in 2005, and with it, the rights to the TG16 brand and many of the games released for the system.

Do you have room on your shelf for another mini console? What other games would you like to see included with the TurboGrafx-16 mini? It’s almost guaranteed that we’ll see a Bonk, Zonk and Bomberman title, but c’mon, Konami, give us Lords of Thunder or GTFO… 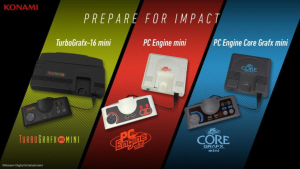