Posted on September 20, 2019 by The Splintering Staff 5 comments

In 1986, the 8-bit era was in its infancy. Nintendo had a few months to show the world that video games were not dead (Thanks, Atari!), and SEGA had just entered into the North American market hoping to capitalize on some of Nintendo’s success. One of the earliest games for the Master System was a license of one of the hottest movies in recent years… And yes, if you are reading this, then you probably already know that this was… Rocky! Wait… That too, but seriously… Rambo First Blood Part II! (Just “Rambo” from here on out)

If you wanted to compare Rambo to other games at the time, then the closest thing would probably be Commando or Ikari Warriors on the Nintendo Entertainment System. Which game was the better game? Hmmm… That’s a tough one for me. I love all of them for different reasons. Really, in 1986, you probably only had one system or the other, so you couldn’t go wrong with whichever you decided to go with, but if you were fortunate enough to have both systems, then I’d say… just get all of them if you like the vertical arcade action shooter games! Seriously, all 3 are some of my favorites! (Even despite the glitchiness of Ikari Warriors… but we’re talking Rambo here, so we’ll move on) 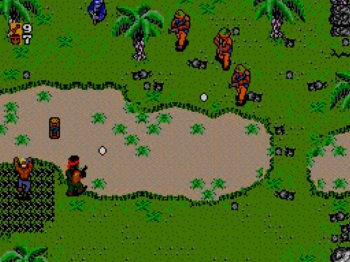 Watch out for that Lifleman up ahead, Rambo!

So Rambo itself is 6 levels long. I know, not a terribly long game, but we’re in 1986 here, remember? Don’t worry though! It made up for the length with challenge! Not that Rambo is particularly hard, but it is deceptively difficult! For one thing, whenever you die in Rambo, you lose all of your power-ups and stored up arrow bombs! That sucks if you’ve been on a good run, but lots of shooter fans know this pain all too well. On top of that, in order to continue, you had to know a code for each level you wanted to continue on! To put this in 1986 perspective, when Rambo was one of my only games, and I would sit and play and play and play over and over and over… I’d make it to about level 3. Really, 1-800-USA-SEGA was almost a requirement here! Thank you Internet for making the game beatable to my MUCH older self!

You’re sending in TWO tanks up against Rambo at the same time? Just don’t forget one thing…

While the main goal is to just make it through the 6 levels, there are also little “huts” (or cop cars, or giant rocks later on) that you can blow up with an arrow bomb to free one of the hostages and get a power-up. These power-ups include more arrow bombs, a more powerful arrow bomb, a long shot, a more powerful shot that will go through enemies, and a power-up to destroy all the enemies on the screen. The best power-up is the one that lets you kill all the enemies on the screen just by firing one of your arrows… but remember how I said you would lose all of your power-ups and arrows if you died? Yeah, there’s that. BUT, if you managed to make it to the higher levels without dying, then you really were able to blast through the game all Rambo-style like my friend Newport in a game of Ghost Recon! 😉

One of the highlights of this game is the soundtrack! Sure, it is only a few tracks long, but they are a couple of tracks that you don’t mind hearing on repeat every other level. At least not when the game is only 6 levels long! Ahhh, the simplicity of the 8-bit era! Also, the variety of enemies is pretty nice for an early 8-bit game. You had regular soldiers, flame thrower soldiers, policemen (because Rambo disobeyed orders to just observe and not engage I guess)… and of course, tanks that can only be taken down by your arrow bombs. 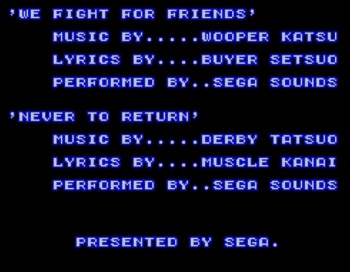 Seriously, if anybody has a link to either of these songs WITH the lyrics, then PLEASE send them my way!

There are a few drawbacks to the game as well. Besides having to know a code to continue *grumble, grumble*, Rambo himself moves SO SLOW!!! I mean, I get that he’s bad @$$ Rambo and all, but a little bit faster footwork would have been appreciated! The “bosses” are, at least until the final boss, just a wall where you have to take out as many enemy soldiers until the wall is “ready” for a bomb arrow to blow it up. (You’ll know when it’s flashing) The last boss… Not much different, but there are at least guns on the wall you have to destroy first! :p Another possible deterrent is that you cannot fire backwards at all. This may or may not work to your benefit, as you can walk backwards while firing straight ahead, but some people may wish you could take aim at the enemies who manage to get past you. I know, I’m with you there… THANK GOODNESS FOR THE CREATION OF THE DUAL STICK CONTROLLERS 10 YEARS LATER! 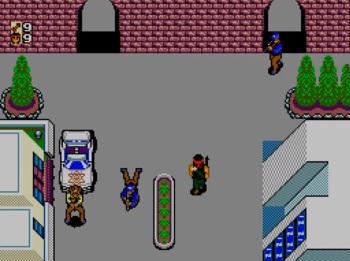 The real joy of this game comes from when you are able to play it with a friend! Just like in the movie, Rambo has his trusty sidekick, Zane, there to help him kick @$$ and take names! Wait… What? I’ve seen the movie like 30 times, and I don’t remember anyone named Zane! Why not that girl, Co, that helps him? Well, it’s very unlikely that SEGA created Zane because they didn’t believe that women were strong enough to kick as much @$$ as Rambo, but Zane is just a memory-saving pallet swap of Rambo. Seeing as how the game doesn’t even have the Rambo license in Japan or Europe (where the game is known as Ashura and Secret Command, respectively), it really makes sense. Still, you’ll be happy to know that Zane went on to become a hero in his own right later down the line… or so I’ve heard! 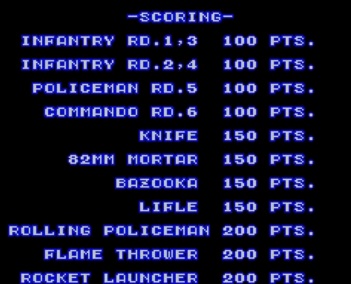 See! I told you it was a “Lifleman!” Guess rifleman was taken!

Yay! So this was fun getting to revisit Rambo again! It was one of my very first games, and it was nice having the tools available to actually BEAT the game that bested me all through my childhood! The Rambo license was cool, and the title screen looked freakin’ awesome! That Rambo theme song by Jerry Goldsmith in all it’s 8-bit glory is still awesome! SO much better than the Nintendo version of Rambo that came out a year later on the NES! (Freakin’ Ack-Lame!) Although, I do have to say, the boss of the game wasn’t very fitting… That’s because in Japan, where this game originated, this was a COMPLETELY different game, as I mentioned above. SEGA just threw the Rambo license on it to help it sell over here! Meh! It was close enough, and Rambo is a WAY cooler title than Ashura or Secret Command!

“We give our hearts… we give it all…”