Posted on October 24, 2019 by Blake Worrell Leave a comment 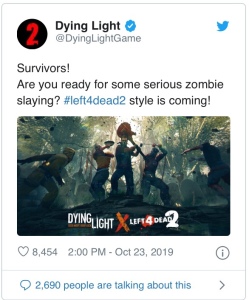 There are no specifics regarding what the the Left 4 Dead 2 expansion will include, though One Angry Gamer speculates that the expansion’s story will “bridge the gap between Dying Light 1 and Dying Light 2“, showing how the outbreak spread across the globe and “why the world failed to contain the virus after it broke out.”

Dying Light is currently available for PC, PS4 and Xbox One. Dying Light 2 is scheduled to release in the first quarter of 2020.