Posted on March 23, 2020 by The Splintering Staff Leave a comment

In February, writer CФMMIЭ МдЯK (aka Commie Mark) launched an Indiegogo campaign for Adventures of Kim Il Sung and Best Korea. Using actual historical photographs to tell the story, Adventures of Kim Il Sung is a graphic novel set in an alternate history where North Korea single-handedly wins the Second World War. The Splintering was fortunate enough to ask CФMMIЭ МдЯK a few questions about his new campaign , and he was kind enough to answer them for us.

As always, the answers below are represented “as written.”

The Splintering: This is an extremely unique project. Can you discuss the process for how you cobbled it all together? How you collected the photographs, how much of the story was driven by the images, that sort of thing?

CФMMIЭ МдЯK: The book is structured as a series of “State of the Union” type speeches where the hero Kim Il Sung recounts to the people of Best Korea current events from his own idealised propaganda perspective. Kim serves as personification of the unreliable narrator.

I had curated thousands of photos from within North Korea over a period of about three months. I had a basic eight point structure laid out in my mind of how the story would be but the images often provided me with the punchlines for jokes which I then had to aim for.

I like having these restrictions to work under. I feel like I have to be more creative to overcome them.

TS: You did a similar “alternate” take on your NOT Daredevil book, using alternate text over pre-existing artwork. How much did you learn from NOT Daredevil? Was it essentially a test run for Adventures of Kim Il Sung?

CФMMIЭ МдЯK: The truth is that both of these books, Kim Il Sung and NOT Daredevil, were clever solutions around hiring an artist. If I could draw well enough neither of these concepts would have existed.

The biggest feedback I received for NOT Daredevil was that it was “too wordy” and that was true. When I put NOT Daredevil together I recycled all the original art work by the legendary Charles Biro and Don Rico (which was great) but was limited by the size and placement of the original speech bubbles (not so great). There were many times when I’d want to do a specific joke but the speech bubble would be too big or the wrong person would speak first. That was a frustrating way to write.

On The Adventures of Kim Il Sung and Best Korea, I had full creative control over the layout, the panels, who spoke when and all that jazz. Which means that I was able to trim a lot of ‘fat’ that I had to ‘fill’ in NOT Daredevil. Its far more concise in its delivery and in my opinion a funnier book because of that.

I had actually finished the first draft of Kim Il Sung before I started working on NOT Daredevil. This Kim Il Sung book was the inspiration behind the hero formerly known as Daredevil. I gave away over 800 digital copies of NOT Daredevil and was surprised by fan demand for physical copies – that they would pay me money for. That had never been my aim. I just wanted the pats on the head and for people to say, “Aww aint you a clever boy”.

I went to my drawer of half written screenplays and scribbles in notebooks and pulled out the most niche, most commercially unviable one of the lot and slammed it on the table. The Adventures of Kim Il Sung and Best Korea isn’t supposed to work. It breaks all the rules of crowdfunded funded comics. It has no ‘great art’ and has a ‘political’ theme. But I knew that if i could learn all the ins and outs of producing a comic and demonstrate that I can deliver then I could look at doing a NOT Daredevil book.

TS: Clearly this book is politically charged, but are there references to more modern-day politics?

CФMMIЭ МдЯK: Its not really political per se, I would describe it as an alternate history. Like with NOT Daredevil the jokes and the humour are aimed at the time period the book is set. In this case, moments after the nuclear bombings of Hiroshima and Nagasaki. Cheap and lazy jabs at modern politics would break the character of the book. If that makes sense? Also I didn’t want to use topical jokes and ‘date’ the book. When I watch old parody films like Airplane or Hot Shots the jokes use word play and are timeless. Go and watch Meet the Spartans now, however many years later it has been, and its even worse.

TS: Now that Adventures of Kim Il Sung is successfully funded, are there any plans to do similar projects in the future, or perhaps even a slightly more conventional comic book project?

CФMMIЭ МдЯK: I have an idea for a sequel where Fidel Castro and Che Guevara have to stop the assassination of JFK. That book would need me to team up with a proper photo shopper. I do like the idea o carrying the alternate history story on into thee future, finally culminating in the West Germans clamouring over the Berlin wall.

TS: What inspired you to do this book? How were you alone fortunate to learn the secret true nature of Kim Il Sung’s reign?

CФMMIЭ МдЯK: I am actually a communist. Some people think that I am doing a weird Stephen Colbert bit but I’m not. I’m being true to myself… just dialed up to eleven. I’ve always wanted to make comics and I’ve always wondered “what if the Soviet Union won the Cold War?” It wasn’t a huge leap from there. North Korea was a better fit though as they’re already a joke.

TS: Two of the more curious tiers you’re offering are the “burn a book” and the “proletariat fanzine” format. Can you tell explain what those tiers include?

CФMMIЭ МдЯK: I had noticed a trend on Twitter of people burning comic books from creators that they didn’t like. For the low low price of $x, I will burn a copy of the Adventures of Kim Il Sung and Best Korea in my garden on a YouTube live stream. Its great, because you, the consumer, don’t even have to pay for postage.
The Fanzine version of the book is my favourite tier and holds a special place in my comic book history. In the future when I retell the story of “How I made it in Comics” I wanted to be able to say that the first book I ever made was a fanzine printed at home on my printer and mailed out. I liked the idea that these would be highly sought after so limited the number available to just twenty. The Fanzine version will be mailed out with no packaging; inspired by the shipping fiasco surrounding indie book Stealing Solo. The fanzine isn’t even saddle stitched or anything, its stapled down the side, some copies will arrive in better condition than others. Some people might only get the back page. But that’s the gamble. Get a mint condition one and you’re laughing.

Any of the twenty that don’t get sold will be added to the issues burned in my “Korean Barbecue.” The comic is only going to have this one limited number printed and every copy that is destroyed makes your physical copy worth more. Right? Supply and Demand. Its capitalism stuff.

For the good of the proletariat!

TS: You have announced that the first stretch goal for the project would be a signed North Korean ₩200 note. From where are you picking these up, and why would you deface these beautiful tributes to the proletariat revolution?

CФMMIЭ МдЯK: The book was fully funded in two days, which I did not expect. I hadn’t put any thought into what I could offer as stretch goals. A few people had made sarcastic comments about the hypocrisy of being a Korean millionaire AND a Communist who’s not redistributing the wealth and the light bulb just went off in my mind. I’ve had to order the North Korean notes off the internet without knowing if we’ll even hit that goal. Travelling from the Far East the North Korean Won take 4 to 6 weeks to arrive and I needed to have them in my possession before asap so I could start delivering the day the campaign closes.

I wonder how much this is worth in “Bison dollars?”

TS: Do you have any other stretch goals waiting in the wings?

CФMMIЭ МдЯK: I’ve since had a few other ideas, I’ve bashed together some prototypes of things but nothing that I am excited to announce yet. The Redistribute the Wealth Tier is so inspired, and I want something EVEN better for the next goal. I’d rather take my time and think of something meta and cool.

TS: A year from now, how would you describe success for the Adventures of Kim Il Sung project?

CФMMIЭ МдЯK: If at the end of this campaign I have broke even and have a copy of the book left over for myself that would be a success. I fantasise about people making unboxing videos, video reviews while wearing “Make Korea Best Again” hats, doing blog post reviews of the book and me sitting with a big fat mailing list for the NOT Daredevil project.

I just want to prove to the community and myself that as promised I can deliver a funny book.

TS: How would Kim Il Sung (peace be upon him) solve the current Coronavirus problem?

CФMMIЭ МдЯK: Kim Il Sung, and all the people of Best Korea, are obviously the most genetically superior race and are already immune to such weak and feeble diseases.

CФMMIЭ МдЯK: Wow. The exploitation of the working classes by the elites. The unfair exchange of priceless time for worthless credit tokens. Surplus value extraction. Those three things combine together into a Voltron Megazord of wage slavery.

TS: Last question, what would you do if you had the full power of Communism behind you?

CФMMIЭ МдЯK: I’d build a fully automated luxury utopia where citizens could focus on being artists and poets while the machines take care of manual labour for us all. A workers paradise, a space station, a non-binary mothership, orbiting Uranus. The Gay Space Base. Be sure to subscribe to my YouTube show Gay Space Communism as well! 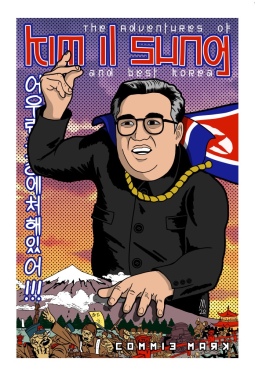 We would like to once again thank CФMMIЭ МдЯK for taking the time to answer our questions and to have some fun with us. You can follow CФMMIЭ МдЯK on Twitter here. You can also visit the Adventures of Kim Il Sung and Best Korea Indiegogo page here.