Posted on August 20, 2018 by Blake Worrell Leave a comment

A lost action adventure game from the 1990s known tentatively as Hardcore is getting a second chance at life on the PS4 and Vita in early 2019.

Originally developed by Digital Illusions C.E. (D.I.C.E.) and set to be published by Psygnosis in 1994, Hardcore was cancelled late in development. Versions of Hardcore were developed for the SEGA Genesis, SEGA CD, and the Amiga. The lead programmer for Hardcore looks to have been Staffin Langin, who noted via social media that the original code for Hardcore fit onto a 1 MB cartridge (though the SEGA CD version was undoubtedly larger due to extra content and other enhancements). The Amiga version of Hardcore was even featured in The One Amiga magazine (below) before its cancellation. 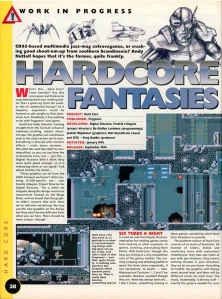 It appears that Psygnosis lost confidence in the project with the arrivals of the Saturn and PlayStation looming. The code for Hardcore went abandoned for over two decades, but now German publisher Strictly Limited has partnered with original DICE staff including Dennis Mendel, Benedict Braitsch and Matt Phillips, to resurrect the game.

Check out the trailer below to get a sense of the game.

I personally get a Terminator for SEGA CD vibe from it, though Strictly Limited describes Hardcore as a “Eurostyle 2D shooter”, similar to Turrican. The upcoming releases on PlayStation platforms will include gameplay features found in the SEGA CD version of Hardcore, including extra boss fights and vertical-scrolling shooter stages.

And for those who may be concerned that Electronic Arts may profit from Hardcore‘s sales since EA currently owns DICE, the game looks to be free and clear of EA’s influence.

Strictly Limited intends to publish Hardcore on PS4 and Vita in both physical and digital formats in early 2019.