On Wednesday, prominent gaming YouTuber “Shirrako” had his channel completely shut down after posting a video clip of Red Dead Redemption 2 depicting the protagonist punching, incapacitating and ultimately killing a non-playable background character in the game. These types of gameplay interactions should be no surprise to those familiar with Red Dead Redemption 2 – and most other games by its developer, Rockstar.

So what’s the problem?

Well, the “victimized” collection of pixels in question was a suffragette, as Red Dead Redemption 2 takes place before the adoption of universal suffrage in the United States. This fictional attack was apparently too much to bear for a writer at Vice (one who is presumably a functioning adult with at least a passing familiarity with adult-themed media such as Game of Thrones and The Walking Dead), who highlighted Shirrako’s video in a one-sided (irony noted), poorly researched hit piece, resulting in an avalanche of ideologues descending on YouTube to flag the video.*

It should be noted that Red Dead Redemption 2 is an open-world game, allowing a great deal of freedom on the part of the player. Characters within the virtual world can be political activists, drunkards, racists, gamblers, religious zealots, or more often than not, completely benign bystanders, and you can kill them all if you so choose – and yes – there are negative consequences in-game for doing so.

YouTube initially responded not by demonetizing the video, not by removing the video, but instead by nuking his channel altogether with an atomic ban hammer, with the official explanation that the video “encouraged violence.”

Fortunately, it seems as though cooler heads are prevailing for the time being, as YouTube is restoring Shirrako’s channel with limitations placed on certain videos. 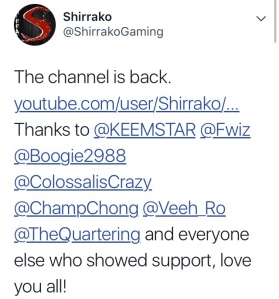 This isn’t the first time a mainstream media outlet has targeted alternative outlets, particularly YouTube creators. In 2017, the Wall Street Journal combed through hundreds of Felix Kjellberg’s (AKA PewDiePie) videos and took a few references to Nazis out of context, which led to Kjellberg losing contracts and thousands of dollars as a result. As of last week, the Journal has also started to attack a monetization feature known as “SuperChats”, in which livestream viewers can donate money to a channel for a better chance to have their comments read on-air. The resulting drama led YouTube to start punishing channels that receive particularly offensive SuperChat messages, something that is largely out of the control of the YouTube creators themselves. This new policy may have already been weaponized, with anonymous viewers purposely posting offensive messages to channels they dislike, then reporting the offensive material themselves.

It’s a good thing that YouTube eventually did the right thing in Shirrako’s case, but one has to wonder, if he didn’t have 500 thousand subscribers, would Google/YouTube have been as understanding? It’s unfortunate that media outlets like Vice & the Wall Street Journal are so willing to assist (or create) political hit squads to destroy hobbies, income, and potentially entire careers, but that’s the timeline in which we find ourselves.

Maybe YouTube will get the hint one day, but regrettably question in my mind isn’t so much “When will they learn?”, but rather “Who’s next?”**

*Note: We do not condone or endorse the harassment of any individual mentioned or referred to above.

**I’ll tell you who’s next- those annoying NPC bards in Assassin’s Creed II, that’s who. I’m pretty sure I killed a full bus load of those guys.