Posted on April 15, 2019 by The Splintering Staff One comment

For the tens and tens of Star Wars fans hoping that Episode IX would also mean the rise of Tico, those hopes took a hit last week when Lucasfilm released the first Rise of Skywalker teaser/trailer.

So what happened to the galaxy’s most famous, moralizing potato sack? We’ve got some theories, so let’s explore and let us know what you think!

One of the most hoped-for possibilities is that Rose Tico dies almost immediately upon her appearance in Episode IX, but how does she buy the moisture farm?

Does she get hit by a runaway sandcrawler? Does she bite the business end of a blaster? Is her head cut off by a giant pair of fanboy scissors? Oh, the possibilities are endless!

Even in a galaxy far, far away, consent matters. Rose Tico very prominently sexually assaulted Finn at the end of The Last Jedi when she kissed him without his express permission. Now that Tico is a sex offender, General Organa will have to keep her behind bars to protect the rest of the Resistance from Tico grabbing them all by the light sabers.

Oh wait, Finn is a guy, so nobody cares.

3. She sucks & the Disney marketing folks know it

Let’s face it, Rose Tico was the most annoying character to infest the Star Wars universe since Jar Jar Binks. Her self-righteous personality was grating, her action figures rot on store shelves, and almost every onscreen moment of hers in The Last Jedi is made worse by her inclusion. There may be a lot of morons running the show at Lucasfilm, but there’s still plenty of folks at Disney who still care about the bottom line. Long story short, Rose Tico is dead weight, and featuring her prominently in Rise of Skywalker‘s promotional materials would be pretty fucking stupid. 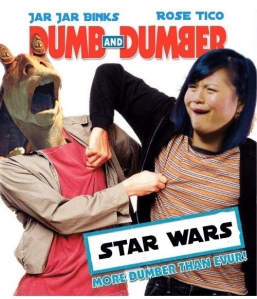 Remember, Rose Tico sucks, but that’s because she’s poorly-written, poorly directed, and has an incredibly dull character design. The actress portraying her, Kelly Marie Tran, didn’t exactly have much to work with, so let’s focus the blame where it most belongs…

So what do you think? What do you hope is the final fate of Tico? Opine freely in the comments!