When other E3 presentations bore you to tears and the hollow platitudes and corporate speak of other game companies pushes your head to the brink of exploding, the delightfully bizarre E3 offerings from game publisher Devolver Digital come to the rescue just in time.

At E3 2019, Devolver did not disappoint. Ripping off the Nintendo Direct format, Devolver also used a RoboCop-inspired story backdrop starring the company’s fictional, fire-eyed Chief Synergy Officer, Nina Struthers (played by actress Mahria Zook). However, Devolver delivered on the game front, too, which is the most important thing, right? 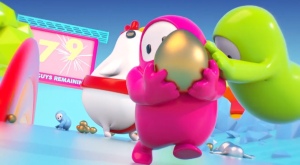 Their first game was Fall Guys Ultimate Knockout, a multiplayer from developer Media Tonic. While there was no actual gameplay shown, what was shown looks like a competitive Lemmings/Pikmin capture-the-flag game with a very colorful finish. Devolver described the game as “super-tits-awesome,” which is – as everyone knows – the best kind of awesome, so that’s some pretty high praise.

Devolver Bootleg is available now on Steam for $5.

Up next is Carrion a gloriously violent “reverse horror” game in which players take on the role of bloody-red blob straight out of a John Carpenter film. According to Devolver, players will “stalk and consume those that imprisoned you to spread fear and panic throughout the facility. Grow and evolve as you tear down this prison and acquire more and more devastating abilities on the path to retribution.” So there’s a story, but they pretty much had me at the “gloriously violent” part.

Carrion is coming to PC and consoles in 2020.

Next up is Enter the Gungeon: House of the Gundead, an all-new, 2-player arcade light-gun game with some RPG elements developed by Dodge Roll and set in the Gungeon universe. Enter the Gungeon is described as a gunfight dungeon crawler where players shoot, dodge roll, and table-flip their way to the legendary Gungeon’s ultimate treasure: the gun that can kill the past. Along the way, players can collect loot, discover hidden secrets, and purchase items from merchants.

Enter the Gungeon enters arcades and arcade home collections in 2020. 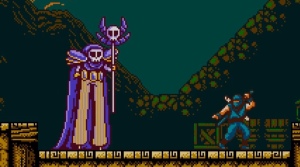 Released in 2018, The Messenger is a 2-D action platformer featuring a time-traveling ninja who at times resembles either Ninja Gaiden‘s Ryu and Mortal Kombat‘s Raiden. Now the action-heavy side-scroller is getting a free DLC upgrade titled Picnic Panic scheduled to release on 11 July for PC, PS4 and Nintendo Switch.

Devolver ended their presentation with one last gameplay video of the stylish, bloody action/platformer My Friend Pedro, which was a highlight of E3 2018. Developed by DeadToast Entertainment, My Friend Pedro is “a violent ballet about friendship, imagination, and one man’s struggle to obliterate anyone in his path at the behest of a sentient banana.”

My Friend Pedro finally arrives on Nintendo Switch and PC on 20 June.

That’s it for Devolver’s “press conference” at E3 2019. You can check a look at the full Devolver Direct E3 2019 video presentation below. Have a favorite of your own? Let us know in the comments!