Impressions: “Gunpowder on the Teeth Arcade” (Switch, Monochrome May Special)

Welcome back to The Splintering’s Monochrome May event! Today we’re picking apart Gunpowder on the Teeth Arcade for the Nintendo Switch. While I would have preferred to do a full review, I’m limiting my thoughts to “impressions” as I didn’t finish the entire game… read on to see why.

Do you love the smell of gunpowder in the morning?

Gunpowder on the Teeth is an action platforming game developed by Gunpowder Team and published by Forever Entertainment. The game fits nicely into our Monochrome May event, as one of its most distinctive features is the monochrome green visuals somewhat similar to an original GameBoy game, but much more detailed. 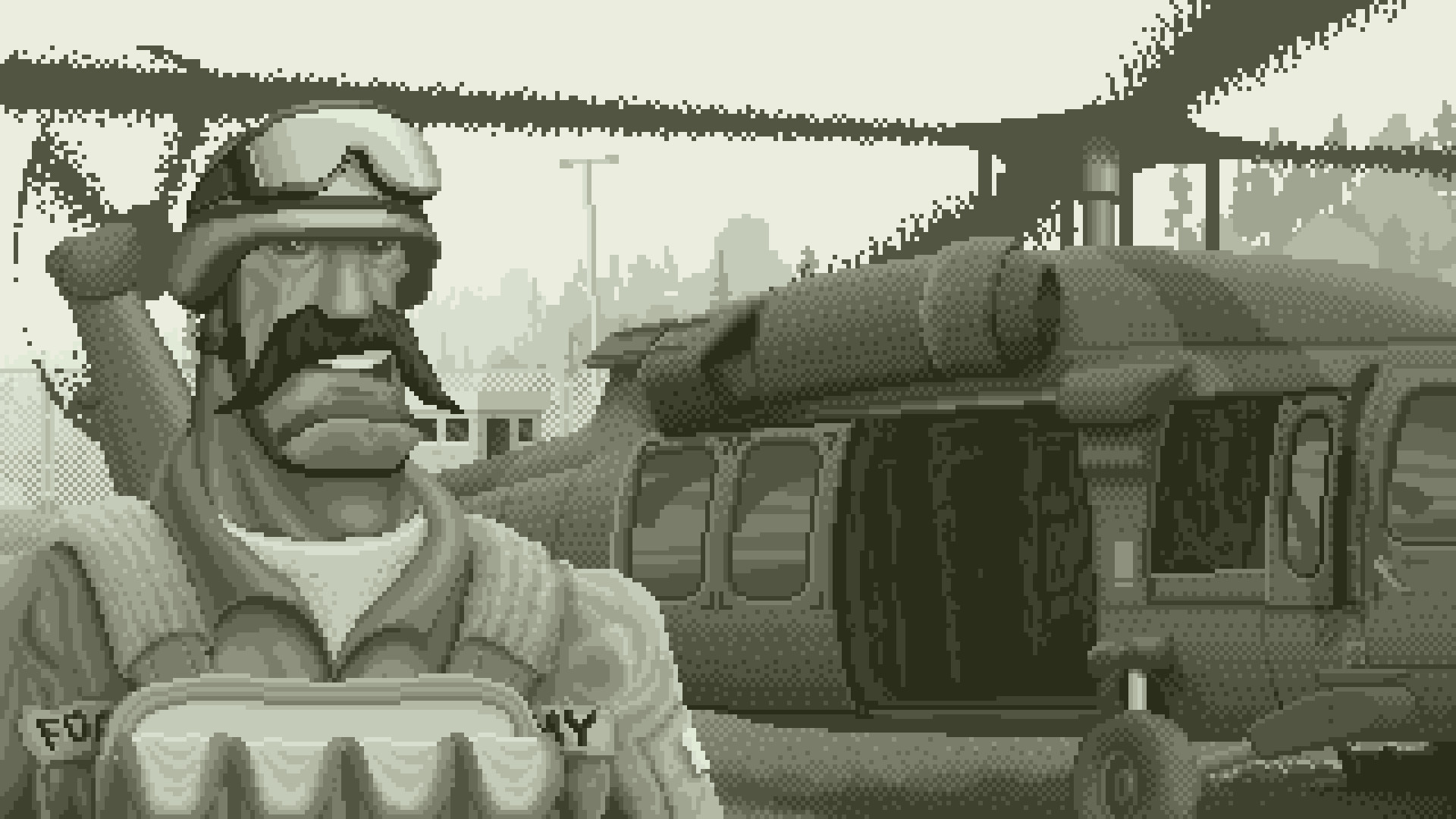 No gunpowder on those pearly whites, Sergeant!

The story is simple enough, you are part of an elite team tasked with infiltrating various locations, your objectives include destroying your enemies, their stuff, and escaping without getting killed. Along the way, you’ll encounter armed resistance in the form of tanks, helicopters, landmines, and of course, a number of enemy foot soldiers.

Fortunately, you are well-equipped to fight back. In addition to an endless number of ammo magazines at your disposal (which you have to reload), each unlockable character has a special explosive weapon, too, including a rocket launcher, grenades, etc. Your soldier is also remarkably light on his feet, as his running and jumping ability is pretty impressive given the full load of gear he’s carrying. You can also wall jump, but oddly only once per leap. 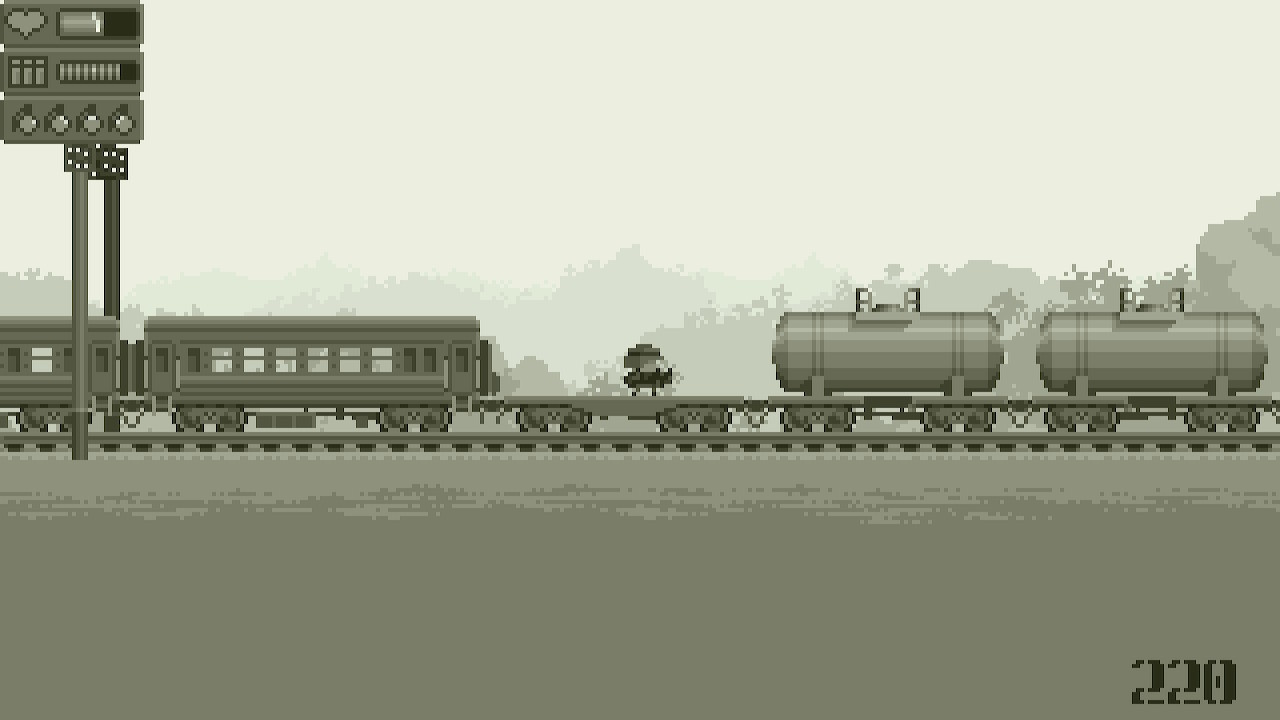 The physics and basic controls feel refined enough, but the developers made some very odd decisions in what actions can be combined with others. While you can walk and shoot at the same time, you can’t run and shoot, nor can you shoot while jumping. You also have to stand completely still to reload, and if you get hung up on barbed wire, you can only walk slowly out of it. If you try to jump or run out of it, you will die instantly. All of this feels counter-intuitive, and takes quite a few aggravating deaths to get used to.

The barbed wire is one of the most frustrating parts of Gunpowder on the Teeth. Given the game’s monochrome aesthetic, the wires are extremely hard to see, and the collision detection for getting snagged on it seems to be off. Fortunately, the developers recognized this as a problem, and provided an option to change the wires color in the options screen to bright green, yellow, red, etc. (Do this). 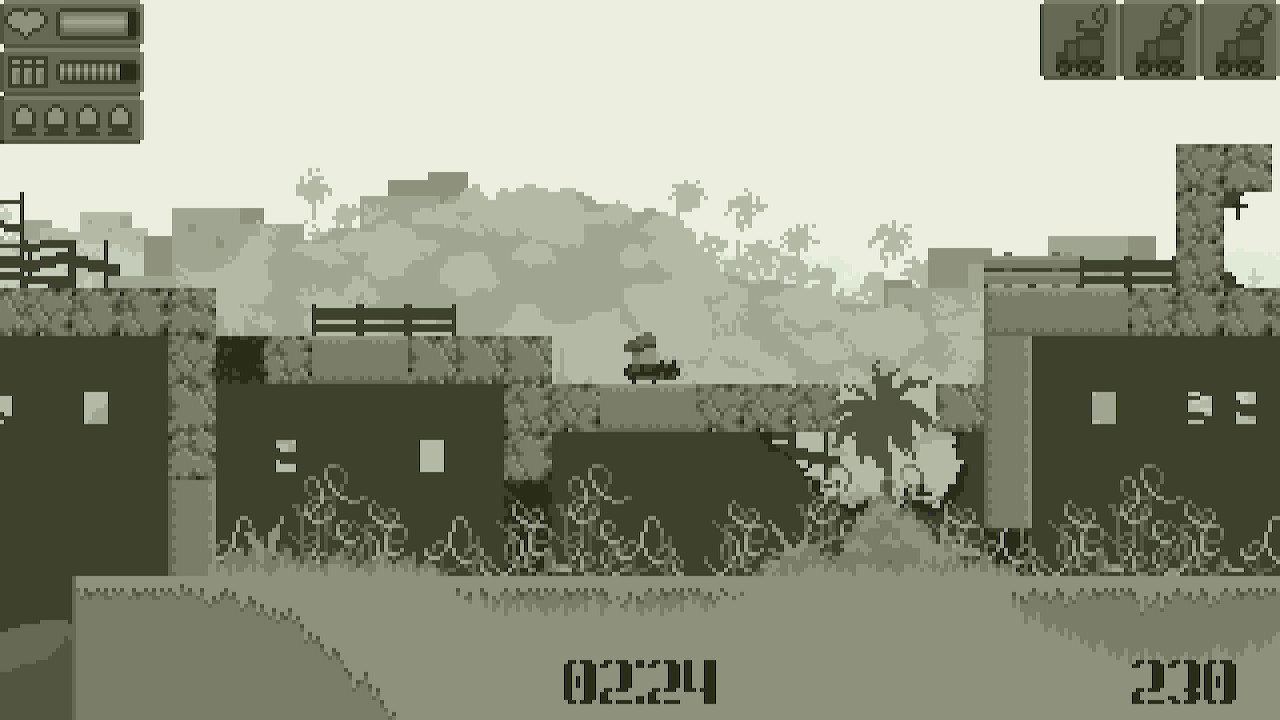 Those swirls on the ground are the barbed wire

While not nearly as annoying as the barbed wire, other hazards are often hard to see coming. This is sometimes by design, as foreground objects will occasionally mask traps such as landmines (and yes, barbed wire). However, there are also times when enemies or obstacles blend into the environment simply due to the simplified graphic style. This sometimes results in some pretty cheap hits, so you are often best served in simply memorizing the stages.

There’s some decent variety in the level design, too, and no stage felt too similar to another. The backgrounds change as you reach new combat zones (Far East, Middle Asia, Europe, Africa and S. America), and you will be tasked with destroying radar stations, evading airstrikes, and defeating certain enemies before the extraction helicopter will come for you.

In my own experience with Gunpowder on the Teeth, I eventually got stuck at a stage where I had to cross a giant minefield, and then defeat a tank. The minefield was tricky, but not too much of a struggle, but the tank is a different story. Once it takes a certain amount of damage, the tanker calls in an airstrike, which covers the entire battlefield and kills you with one hit. I was never able to find the solution to this – there’s nowhere to successfully take cover, there is no way to defeat the tank before he calls in the strike, and backtracking through the minefield at breakneck speed didn’t save me either. Since this tank stage isn’t even halfway through the game, I can’t really call this a “review”. 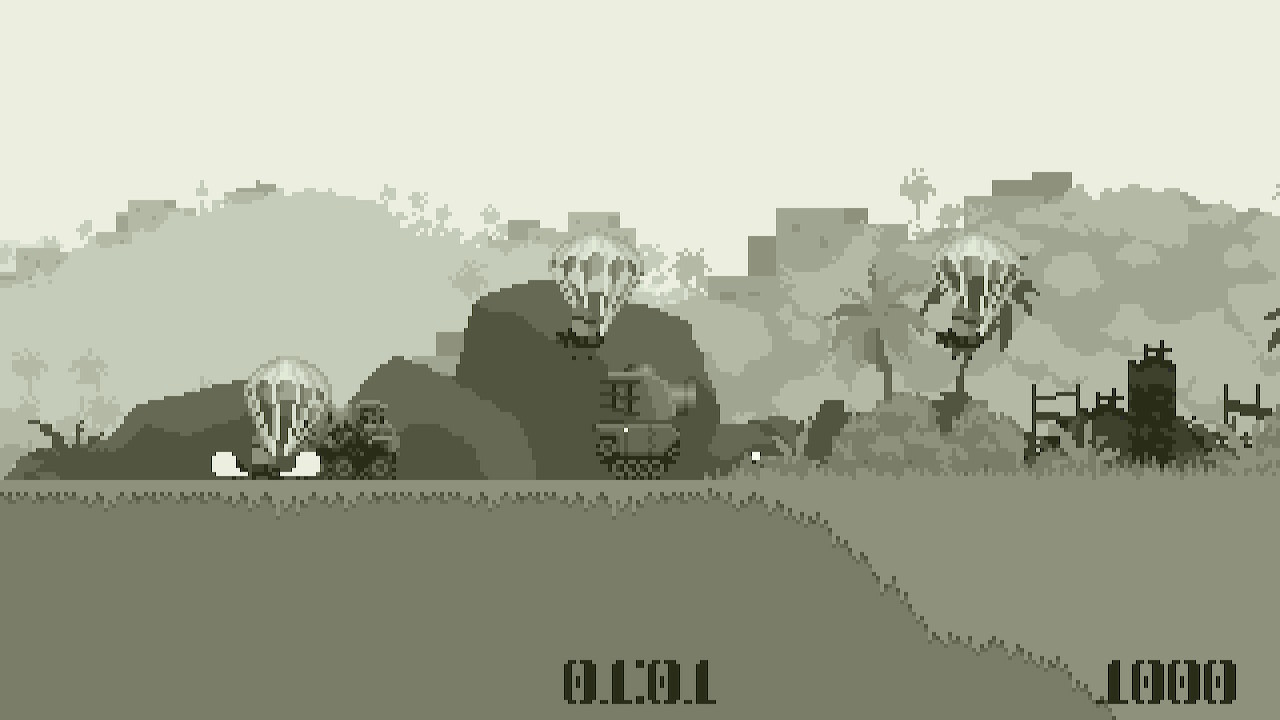 I really wanted to enjoy Gunpowder on the Teeth more than I did. Yes, it’s designed to be difficult, but the challenge is unintuitive, and at times, unfair. Other punishing platforming games like Super Meat Boy can be similarly difficult, but while those employ more streamlined control schemes and graphical styles, Gunpowder on the Teeth suffers from over-complicated mechanics and a visual style that doesn’t lend itself very well to such a challenging game.

There’s still a lot to like about Gunpowder on the Teeth, though. In addition to the cool visual aesthetic, the music, voices and sound effects are all well done and don’t get too grating, even in longer play sessions. You have infinite lives and the game saves with each stage you complete, so your well-earned successes are never for naught. You also unlock other characters as you progress, which promotes replayability – if you can get past that tank, at least. And most importantly, there are plenty of moments in the game that are indeed fun.

Regularly priced on the Nintendo Switch eShop at $4.99, Gunpowder on the Teeth Arcade gets a pretty steep discount from time to time (often at just $0.49). If you’re on the fence, that may be the best time to jump on, and you can pick it up here. It’s definitely worth a shot at that lower price, and if you figure out the whole tank thing, be sure to let me know how to defeat it! 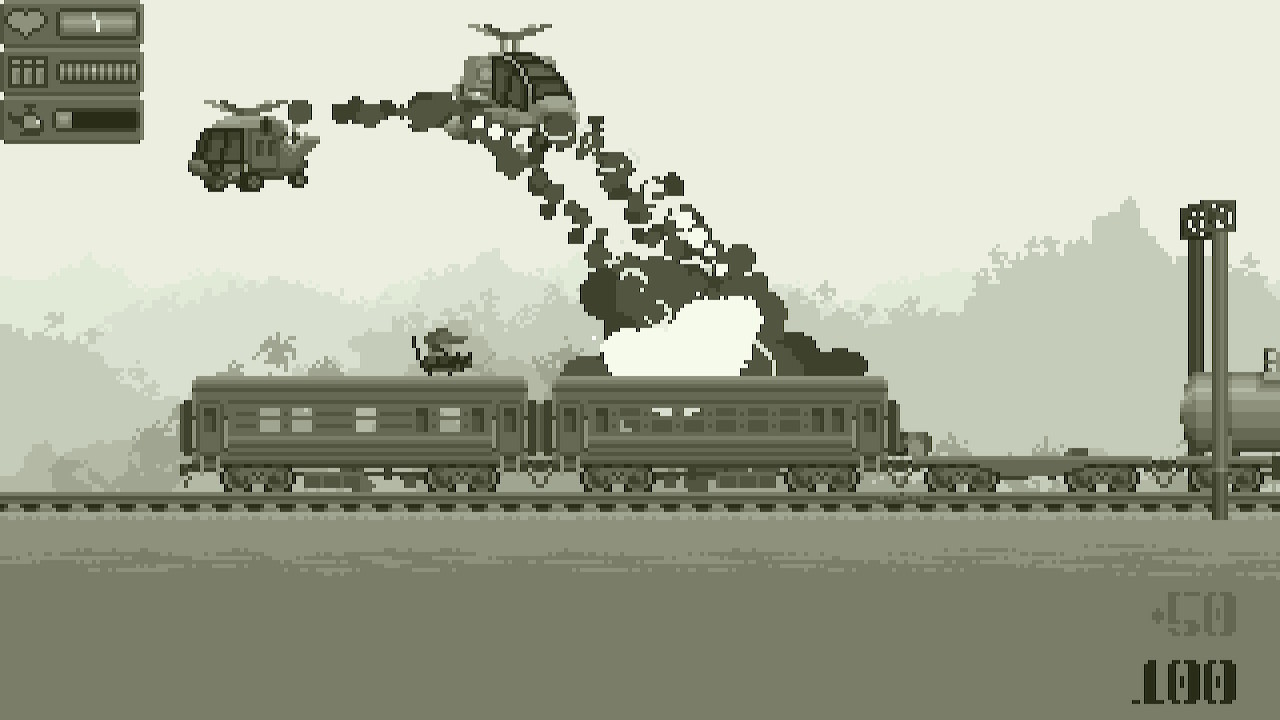 You have to admit, it does look cool

To check out more of The Splintering’s Monochrome May content, go here.