Welcome back to the Festival of Dread, The Splintering‘s month-long celebration of all things fantastic and phantasmic!

We have reason to believe that Johnny Phantasm artist and co-creator Patrick Thomas Parnell has been cozying up to the indie comics press as of late. In fact, we have inside information that indicates that The Splintering‘s own founder, Blake Worrell (aka “me”), has been appearing semi-regularly on Parnell’s YouTube channel for weeks, cross-promoting each other’s work.

In light of these scandalous revelations, the prospect of The Splintering posting a fair and unbiased review of Johnny Phantasm and the Tales of New Detroit, 1977 seems like a tall order. So instead of even trying, we’ve decided to go overwhelmingly negative with our review and be nit-picky as hell, so that way there are zero accusations of impropriety.

So let’s rip Johnny a new one, shall we?

Johnny Phantasm in Tales of New Detroit, 1977 is an excessively-long-titled comic book written by Evan Pozios and illustrated by Patrick Thomas Parnell. While the first crowdfunding go-around netted backers a book in graphic novel format, the JP team completely cheaped out on the second crowdfunding campaign by breaking the story into three parts, and reprinting the book on newsprint paper stock. We will be reviewing the smelly newsprint version.*

The opening pages introduce the reader to Johnny Dontcare, a top mob assassin in the underworld of New Detroit (aka Delta City?). On one of his should-be routine hit jobs, Johnny and crew bump off a corrupt priest who has been skimming cash to feed his gambling addiction. The good father goes down without much of a fight, but he does manage to curse Johnny with a powerful, supernatural force, a bit similar to Ghost Rider or The Demon. (What the hell kind of curse is that, anyway?)

Johnny makes good use of these new abilities by settling old scores with the mob, and taking out plenty of bad guys in the process. The mob reacts by sending a host of colorful assassins of their own to shut him down, while Johnny himself makes a new ally and learns more about his cursed condition. Along the way, a mysterious trio known as the “Three Kings” watch and manipulate events from what seems to be a cosmic prison a dimension or two away.

As far as the overall story goes, it’s paced quickly and very action-heavy (erm- if you like that sort of thing), though there is definitely more than enough exposition to give you some background on the supporting characters. I would have preferred for the mystery of Johnny’s origin to have been drawn out a little bit longer; as written, it was a little too quickly and conveniently revealed. This leaves the manipulative Three Kings and the setup for the Johnny Phantasm sequel,  Halloween 1985, as the only remaining mysteries for readers to look forward to in future books.

I should also note that there were a couple of instances where the narrator changes mid-book, and not only is it not always clear who the new speaker is, once or twice it wasn’t clear that the narrator had changed at all. In issue 1, I went several pages thinking that Johnny was still narrating, only to find out that I was actually reading the inner thoughts of a Russian mob boss (prompting a super-annoying and time-consuming re-read of four whole pages!). 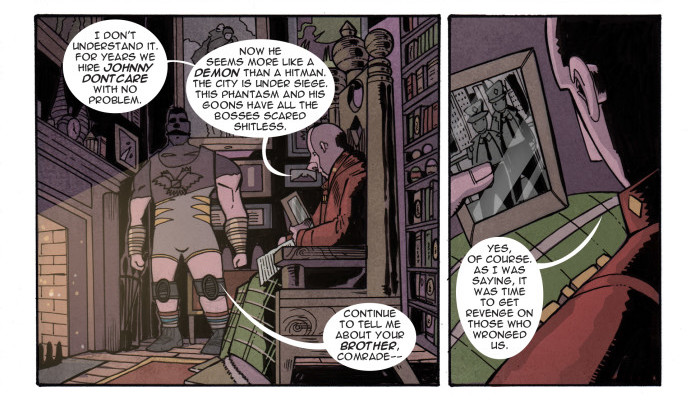 Back to the Drawing Board?

Parnell’s artwork is a stylized mixture of unique character designs, expressive gestures, and – when appropriate – a dose of creepiness. Given Parnell’s personal love of toys, it’s no surprise that Johnny Phantasm and most of the key supporting cast look ready-made for action figure designs (which he already intends to produce and sell like the capitalist monster that he is!). As such, there’s a lot of detail in these characters, which muddies the art at times when all of those details are crammed into a smaller panels.

Johnny, fix your face! One example of too much detail crammed into a small space

The world surrounding Johnny also feels distinctly 1970s (the worst decade ever, am I right?), from the fashion, cars, and technology. There’s also an infusion of character designs from the 30s/40s with the Scarlet Heart, the Siberian Tiger, and a few of the older gangsters. So much for consistency, eh Patrick?

The page layouts have their own distinct flair, with several elongated two-page layouts that give the book a cinematic feel at times. There is art to match all of the story’s different moods, whether it be action, horror, or the few injections of humor. I personally found the creepier moments to be the most visually striking, particularly those that were accented with snot-colored fog.

Not so Hot Off the Presses

As mentioned above, the version I received was the smelly newsprint version, which split the story into three separate issues. This version also has additional bonus materials at the back of each issue, including sketches, page thumbnails and an extra short story featuring the Scarlet Heart, so way to go wasting paper and killing trees, ass holes.

Given the extra content, covers, and the switch to newsprint, there was presumably a new print file created for this reprinted version of Johnny Phantasm. In that case, it’s a bit unfortunate that a few kinks weren’t worked out in the process. To start, the above-mentioned narrator confusion could have been addressed with some extra color. There’s also a “to be continued” box right smack in the middle of issue 2, while both issue 1 and 2 should have ended with one, and did not.

Oh, and there were at least four typos. Ermahgerd!

In all seriousness, Johnny Phantasm was a fun book. It’s a little bit unfortunate that a key point of intrigue surrounding Johnny’s origin was explained away so quickly, but there are still enough remaining mysteries and a compelling cast of well-designed characters to bring the reader back for the next installment. I found the book to be better as a re-read than I did the first time around, as I was better able to follow the story and appreciate the artwork a bit more. I’d also really like to see a standalone story starring the Scarlet Heart at some point, as I personally gravitate more to “purely” heroic characters than to antiheroes.

In any case, I still recommend Johnny Phantasm and the Tales of New Detroit, 1977, particularly if you are a fan of comics with a dash of supernatural horror mixed in. If the creators can promise me a Members Only jacket cameo in the Halloween 1985 follow-up, I’m in. You can sign up for email updates on the Johnny Phantasm Halloween, 1985 via the Indiegogo pre-launch page here.

Thanks for reading! To check out more of The Splintering’s Festival of Dread content, go here.

*Additional disclosure: the author of this post was a backer of the Johnny Phantasm in Tales of New Detroit, 1977 Indiegogo campaign.

The Splintering’s Teespring store has new items celebrating October’s Festival of Dread! If you like what we do & want to help keep our site 100% free of paid ads, go here!