On Friday, award-winning author Jon Del Arroz launched a crowdfunding campaign for Flying Sparks: A Hero and Villain in Love via Indiegogo.

Del Arroz is best known for his steampunk novel For Steam and Country. The Flying Sparks comic features illustrations by Jethro Morales (Dejah Thoris, The Green Hornet) and a cover by the Jawbreakers: Lost Souls art team of Jon Malin and Brett R. Smith. 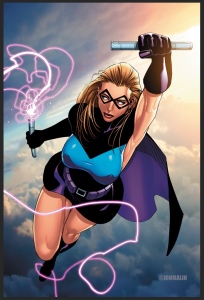 Flying Sparks is a superhero comic described as an intense personal drama similar to the Batman/Catwoman relationship.

Here’s the plot synopsis from the Indiegogo page:

Chloe Anderson is a physics student by day, a hard working, smart girl who’s close with her mad scientist professor, working with him as a teacher’s assistant. She has access to several of his inventions, and in order to help test them, she moonlights as the superhero, Meta-Girl.

Johnny Benvinutti comes from a well-established Italian crime family, and recently found he has the ability to shoot lightning from his hands. His descent into deeper crime only creates the need to cover more up as he runs his operation out of a coffee shop front business.

When the two of them meet, sparks fly on multiple levels. But will they be able to maintain their relationship while keeping secret lives from each other?

The Indiegogo project will fund the first three chapters (66 pages) of a planned ongoing series. The art is already finished, so Flying Sparks should be ready for print once the final lettering duties are complete. Del Arroz expects for digital copies to be delivered as soon as the crowdfunding period ends.

Backers can chose tiers including either physical or digital copies of the book starting at $12, while big spenders can snag some other rewards including posters, t-shirts, and even naming a character in the story. If you want to support the project but don’t care to receive anything in return, you can do so for just $5. Despite already hitting its funding goal, there are also a few stretch goals that will add extra artwork and a poster print by artist Timothy Lim.

Interested? You can check out the full Flying Sparks Indiegogo project here.