Posted on September 19, 2018 by Blake Worrell Leave a comment

Comedian Seth Rogen lit a small Internet fire this week when he took to Twitter and “revealed” a relatively unknown feature of Duck Hunt on the original NES. The world was stunned to learn that the onscreen ducks could actually be controlled by a second player. 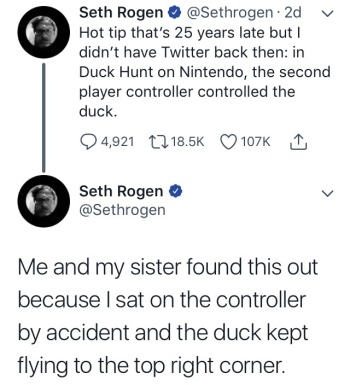 This revelation came as a shock to many, as I couldn’t even count how many “mind blown” messages followed. Several websites soon picked up on the trending topic, and articles from Maxim, Mashable, even Nintendo Life started to pop up.

What was crazy to me, however, wasn’t the revelation itself, it was how many people didn’t know already this. I’m of the generation who grew up with Duck Hunt, and was aware of this “trick” even in the late 80s. Where could I possibly have picked up on such a random game feature? 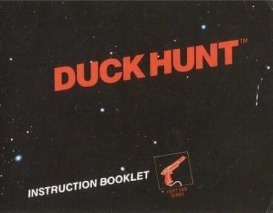 I’m not writing this to throw shade on Rogen, or even the “journalists” who were so quick to cover Rogen’s social media post. This is more of an admission that maybe older, retro gamers (such as myself) don’t paint an entirely accurate picture of gaming “back in the Ferg.”

There’s no shortage of “back in my day” testimonies lambasting modern gamers for having games that are too easy, have elaborate tutorial sections, or are walking simulators. I have the same complaints – often – and they’re legitimate in many cases, but if they’re coupled with a haughty attitude as though all 80s gamers were masters of their pixelated domains, this Duck Hunt situation indicates that perhaps some gaming elders weren’t so masterfully thorough as we’d like to think.

We didn’t even read the book.

Honestly, this realization should be obvious from a single case study: E.T. The Extra Terrestrial on Atari 2600, which is often dismissed as “the worst game of all time.” Yes, E.T. was indeed a disappointment, it fell incredibly short of sales projections, and Atari discarded copies of the game at numbers rivaling those of the Ottomans discarding Armenians during World War I. However, for those who actually read the instruction manual and learned how to play the game, E.T. wasn’t all that awful. It wasn’t great, mind you, but it was at least passably lackluster.

Clearly Duck Hunt doesn’t fall into the same category as the manual wasn’t required to learn the basics, and it’s admittedly still a better game than E.T. Still, I wonder if classics like Yars’ Revenge would be regarded so highly if none of us knew how to play it when it was first released. I imagine those going in blindly today would probably hate it.

“Yars’ Revenge” is far more complicated than it looks

I’m not surprised at so many “blown minds” coming from younger gamers who might have discovered Duck Hunt in later years, but I am surprised to see so few who remember controlling ducks as a kid, particularly those from whom I would have expected otherwise.  (Really, Nintendo Life? I’m shocked) Is this a “rose-colored glasses” story? Maybe. Don’t get me wrong, mine is still the greatest generation of gamers and you noobs still need to “git gud”… but it’s pretty clear that some of us old codgers could stand to read a book or two.