Welcome to Attack Helicopter Week here at The Splintering! How about kicking things off with a lesser-known, retro import? Grab your yoke and pop in your earplugs, because today we’re picking apart Choplifter! for the Nintendo Famicom.

Choplifter! is a unique title as it started as an Apple II game and was later ported to the arcades. The Famicom version was released by Jaleco in 1986, though it never made it across the Pacific as an NES title, and as it turns out, that’s completely fine.

Among side-scrolling shooters, Choplifter! is certainly unique. The player controls a heavily armed rescue helicopter infiltrating enemy territory to recover P.O.W.s captured by the Bungeling Empire. You fly from right to left, dodging enemy attacks, blasting open prisons, and then cart recovered P.O.W.s back to your home base. If your helicopter is destroyed with prisoners in tow, those prisoners also die. Once you’ve recovered enough (20) prisoners, you advance to the next stage, or “sortie”. There are four stages in all, a desert, ocean, volcanic cave, and a big city skyline. Once you complete stage four, the stages repeat, presumably with no definitive ending.

The Famicom visuals of Choplifter! won’t blow you away, but they’re adequate. There is just a touch of parallax scrolling, though the colors are pretty flat and half the stages are pretty dull in their look and design. The ocean and skyline stages (2 and 4, respectively) are more interesting, though you’ll have to get through the more drab areas to enjoy them.

Getting to those later stages may be more difficult than you think, as Choplifter! – like many of its 8-bit contemporaries – is pretty tough. The controls will take some time to adjust to as well, as you must hold down the A button to change the facing direction of your helicopter, and you can only attack certain enemies with bombs when in the “mid” position. You’re going to die a lot in the first stage, but you’ll get the hang of it, eventually, and you’ll learn the best strategies for clearing through enemy defenses as you go. 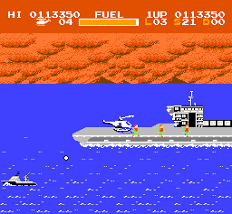 The bolder visuals of sortie 2

Perhaps the biggest detriment to Choplifter! on Famicom is the sound. The sound effects get the job done, but the music, the one-sound-channel distillation of what is otherwise a catchy arcade tune, is awful. It’s particularly grating and repetitive, and this is coming from someone who loves the main tune in other versions of the game. What makes matters worse, the music doesn’t change from stage to stage, so you’re stuck with the same, ear-bleeding track throughout the game while other ports of Choplifter! include the full soundtrack for every stage.

While Choplifter! on Famicom is a competent port, that’s about all it is. If you’re looking for an 8-bit port of Choplifter! to add to your collection, I highly recommend the SEGA Master System version instead. Not only is it relatively inexpensive and easier to track down, but in every department, graphics, gameplay, and especially sound, the SMS version is the superior port. As a collectible oddity, Choplifter! is completely playable on Famicom. However, you’re going to need to put in some time to master it, and lackluster visuals and horrendous sound will be doing their best to push you away the whole time.