In July, indepedent comic book creator and Tyrant Creative Media founder Torian Tarrant launched a crowdfunding campaign for Catalyst, a new comic book described as “an international spy action set in the world of an urban crime/drama.” Written by Tarrant and featuring illustrations by Von Randal, colors by Paris Alleyne and letters by Matias Zanetti, the first issue of Catalyst is as 40-page story intended to lay the groundwork not just for additional comic books, but for other mediums including a live-action series as well, with a trailer possibly coming as early as September.

Every backer of Catlayst will also receive a digital, 18-page prologue story which introduces readers to Dom Cross, Catalyst‘s protagonist. Tarrant was kind enough to share this prologue with The Splintering, and it certainly looks as though there is a strong foundation for an enjoyable read.

The Catalyst prologue story is told from Dom’s perspective, and his narration bounces between flashbacks of his life as a mercenary and his wrestling with those memories in current day. It’s certainly a story intended for mature audiences, with ample levels of gun violence and a few risqué images (certainly nothing pornographic, though). If you recall Chapel’s origin from the Spawn HBO series, it’s cut from that same cloth.

To be honest, the Catalyst prologue itself reads very fast on account of the action-heavy tone and minimal dialogue. It does lend itself to second and third readings, however, which gives you the opportunity to revisit Randal’s artwork, which is quite good with well-paced layouts. Alleyne’s colors are also worth highlighting, as I particularly appreciated the “heat” evoked during the action sequences, and the purples and reds in the modern day punctuated Dom’s sense of unease.

Backers of Catalyst can pick up a digital version of both issue #1 and the 18-page prologue for $5, while physical copies of issue #1 (which come with both digital books) start at $10. For those with more cash to spend, you can also pick up Catalyst posters, desktop wallpapers, and variant covers.

We’d like to thank Torian Tarrant for sharing the Catalyst prologue with us. Catalyst looks to have the makings of a very solid product, and if this sounds right up your alley, you can visit the full Kickstarter campaign page here. 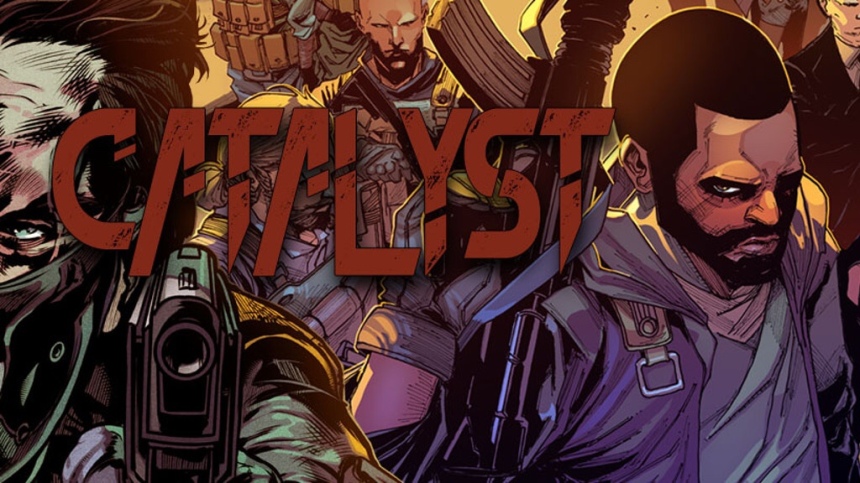