Ever since Warner Bros. hired Joss Whedon to conduct reshoots of 2017’s Justice League film, rumors have swirled that a version of the movie exists which captures the artistic intent of its original director, Zack Snyder. This has spawned an online movement of DCEU fans who have adopted the hashtag #ReleaseTheSnyderCut to pressure WB to bring this rumored version into the light of day, while other voices contend that a watchable “Snyder Cut” of Justice League doesn’t exist.

On Sunday, Wonder Woman actress Gal Gadot lent her voice to the Snyder-faithful “conspiracy theorists” by posting the #ReleaseTheSnyderCut hashtag to her own social media. A Snyder Cut of Justice League may not exist, but Gadot either believes it exists in some form or she’s torturously trolling an enthusiastic fan base for some reason. 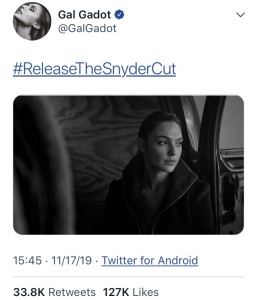 Despite the hiring of Whedon and the approximately $200 million in reshoots, Justice League still failed to pay off for Warner Bros., which ended its run grossing only $659 million. Even if a Snyder Cut exists in some form, it would almost certainly take some effort to finish the special effects and finalize the edits. Would releasing a separate cut help WB recoup a few extra bucks, or will polishing up a wildly different version of an already financially disappointing movie be another mistake? Let us know what you think in the comments!

It appears that Justice League co-star Ben Affleck echoed Gadot’s sentiments with his own pithy, but pointed social media post.

Now this is getting weird. Is this all simply professional support for Snyder, or is there something more significant going on?