Posted on December 17, 2019 by Blake Worrell Leave a comment

Welcome back to The Splintering’s Jolly Jinglings holiday event! Today we’re tackling a rare example of a Christmas-related superhero game…

Superhero games have historically been hit or miss, but Batman has managed to have slightly better luck than many other characters. The 16-bit era was particularly kind to the Dark Knight. There are several solid Batman games on the Super Nintendo, SEGA Genesis, even the Atari Lynx got a solid Batman Returns port, but Konami’s SNES version of Batman Returns is certainly one of the best.

The Bat – The Cat – and The Penguin

Released in 1993 (nearly a year after the film on which it’s based), Konami’s Batman Returns for the Super Nintendo was worth the wait. This time taking the form of a single-player arcade-style brawler, Batman Returns recreates the events of the blockbuster movie as the Dark Knight battles the villainous pair of Catwoman and The Penguin. The player controls Batman himself, equipped with batarangs, exploding test tubes, a grappling hook, and of course your trusty martial arts skills.

Each of the game’s seven stages offers a fair bit of variety, with Batman taking to the streets, rooftops, sewers, and eventually the Gotham City Zoo. The game will occasionally switch to purely side-scrolling mechanics (without the simulated 3D play field of an arcade beat-em-up), which demand that Batman navigate the terrain in more of a platforming manner, jumping between window sills and grappling over deadly gaps. These purely two-dimensional moments might break up the action, but they aren’t as well-realized as the brawler sections. The character sprites all remain the same size, which is pretty large, and this doesn’t give Batman much room to maneuver or dodge when avoiding traps or grappling between platforms.

“Step away from the tannenbaum, slim!”

Stage 5 is the most unique of all the stages: the Batmobile. For 1993, this stage looked pretty advanced and made good use of the SNES’ graphical capabilities, but holy smokes is this stage boring. Before reaching the boss, you are confronted with wave after wave of motorcycle-riding thugs, all with an identical sprite design. It gets pretty dull by the end. Why do Batmobile stages always suck? Fortunately, the driving stage isn’t all that difficult, just boring, and then you’re back to busting hoodlum heads…

While it’s true that Batman Returns does an admirable, though imperfect job in mixing up the stage design, it has to be noted that there simply is not much variation in terms of enemies. Batman fights hordes of the same enemy types over and over again, with only a slight bit of palette-swapping to spice things up. Skinny clowns, fat clown, bazooka clown, sword swallowers, fire clowns and knife throwers… I hope you like beating up clowns! Even the Catwoman boss fight is repeated in two separate stages.

It’s a good thing that the basic combat is pretty satisfying. The Dark Knight may move a bit slowly for my taste (I typically prefer speed characters in brawlers), but his criminal-pounding abilities feel satisfying. All of the gadgets and punches and kicks are nice, but Batman’s grapples and slams are pure, bone-shattering joy. Batman can life enemies and slam them into the ground (even the fat guys), and can sometimes sling them into the background, causing damage to the environment. If that weren’t enough, you can also grab two enemies at once, and smash their heads together.

Aesthetically, Batman Returns does a fine job recreating the environments and mood of the Tim Burton film. The character designs are spot on, Batman looks great, and the music is a well-done, 16-bit recreation of Danny Elfman’s iconic score. There are several nice graphical touches in a few of the stages too, including the lighting/shadow effects in stage 4, and the aforementioned Batmobile stage. There is also a girthy helping of digitized cinemas taken straight from the movie, which – while not particularly dazzling by today’s standards – helps to flesh out the story in a way that was quite impressive in 1993. 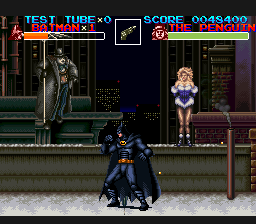 “Step away from the supermodel, chunky!”

While Batman Returns isn’t quite the best brawler on the SNES, it’s one of the better single-player brawlers of the 16-bit generation (behind Splatterhouse 3). It’s faithful to the source material, pleasing to both the eyes and ears, and despite a few hiccups in trying to mix things up, is still quite a bit of fun. Fans of either arcade-style beat-em-ups or Tim Burton’s Batman movies will find a lot to enjoy here, though some stints of monotony and the lack of a two-player option may limit your replayability. 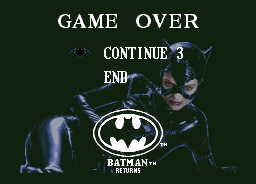 HELP WANTED: costuming assistant needed to meticulously sew small pieces of vinyl onto Michelle Pfeiffer. No pay. the experience is its own reward.

Thanks for reading! To check out more of The Splintering’s Jolly Jinglings content, go here.