Posted on March 13, 2020 by The Splintering Staff 2 comments

Earlier this week, independent comic book creators Wyatt Holliday and Peter Gilmore launched a crowdfunding campaign for Rocket Gal and the Mole Men of Mars, a 32-page comic book written by Holliday and illustrated by Gilmore. At the time of this writing, the project has already raised more than 600 percent of its original funding goal for a total exceeding $3 thousand.

Created as a cheeky throwback to B-movies of yesteryear, Rocket Gal is inspired by sci-fi classics such as Flash Gordon, Barbarella, Buck Rogers, and features artwork inspired by the Don Bluth’s laserdisc games Dragon’s Lair and Space Ace.

When the galaxy’s greatest scientists are lost on Mars, Rocket Gal is tasked with discovering their fate and returning them home. Accompanied by her faithful companion, Booster, Rocket Gal must face the subterranean denizens of the Red Planet – The Mole Men of Mars!

Backers can get a physical copy of Rocket Gal for $20. If you have some extra cash burning a hole in your pocket, you can also pick up a variant cover, additional copies of the book, original artwork, a replica of the heroine’s ray gun, and even a chance to have your likeness drawn into the pages of the final product.

Does Rocket Gal arouse your interest? You can check out some sample artwork below or visit the full Rocket Gal and the Mole Men of Mars Indiegogo campaign page here. 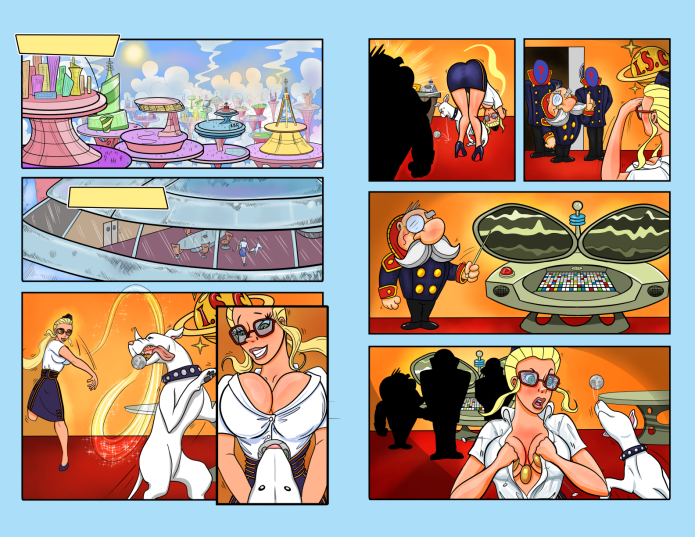 Prepare for blast off…