Welcome to Central City – home to a herd of dastardly ne’er-do-wells known as the Rogues! Led by the maniacal Trickster, villains such as Mirror Master and Captain Cold are terrorizing the streets with a wave of bombings across the city! Fortunately for the law-abiding citizens of Central City, their streets are protected by The Flash, also known as the Fastest Man Alive! 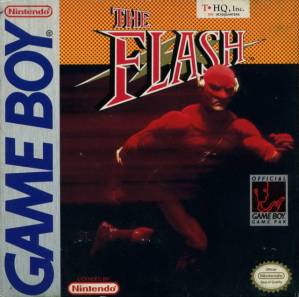 Released by THQ in 1992 for the Nintendo Game Boy, The Flash is based on the CBS superhero television series that ran from 1990-1991. As a side-note, it’s really hard to believe that the TV show only lasted for 22 episodes over nine months. I guess that’s a testament to how slowly time moves when you’re a kid, eh?

Back to the task at hand, in THQ’s The Flash, you control the titular Scarlet Speedster (government name: Barry Allen) as he races through 13 stages filled with thugs, supervillains, traps, and bombs.

“I Go Crazy and Lose Control”

The controls in The Flash are admittedly a bit strange. The button layout, which cannot be changed, includes one button to punch, another to kick, pressing both activates your super speed “Flash” power, and you have to press up to jump. If that last one takes you aback, I don’t blame you. It’s an odd choice, and it takes some painful practice to get used to, and you’ll probably lose quite a few lives as you acclimate to it.

If you do get over the “up to jump” hurdle, you’re pretty much all set. The rest of the game feels pretty good, otherwise. The Flash feels quick even when he’s not using his special abilities, and when you do cut loose at full speed, it’s a helluva hoot.

You’re enhanced with The Flash’s speed force (they don’t call it that in the game), which is a power meter allowing for super speed and breaking through objects (though not enemies) with ease. Unlike your health meter which refills with enemy kills, your speed meter can only be refilled with food (a nice nod to the high metabolism gags from the TV show). Snacks can be purchased from vending machines scattered throughout each stage, so you’ll have to collect money in order to make a purchase. 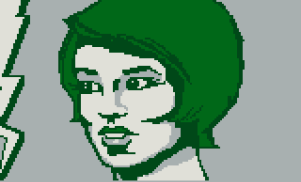 Anyone else have a crush on Dr. Tina McGee?

Each stage begins with a quick cinematic dialogue between Barry and his scientist support partner, Dr. Tina McGee. While these aren’t overly impressive by current standards, but they look pretty good by the standards of the day, and they don’t take too long to skip through if you prefer.

The stages consist of city streets, warehouses, museums, and train yards. These backgrounds all repeat a couple of times by the end of the game, but that’s certainly not atypical. While most of the stages are fairly the same – race to the end to disarm a bomb within a fairly aggressive time limit, the train stages are the standout setting. In the train stages, you have to carefully ration your speed meter as you chase down multiple moving trains. These stages are the most intense moments of the game, and I’d say that they’re the most fun, too.

There’s not much to say for boss fights, though. The Trickster shows up in every stage to harass you, but he falls back quickly after taking only a few hits. You will have to deal with the likes of Captain Cold and Mirror Master as the game progresses, though Captain Cold is defeated just as simply as any other gun-wielding enemy. Mirror Master, on the other hand, creates holograms in the form of flashing enemies meant to slow your approach to the time bombs at the end of each stage.

The last stage is The Flash’s final showdown against the Trickster. Just like previous run-ins with him, The Trickster isn’t much of a threat if you stay extremely aggressive with your speed powers and don’t let up. There’s also a simple puzzle to solve before completing the game, but the Trickster gives you a hint to its solution in the cinema immediately prior. 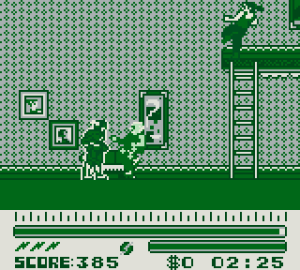 Is the ladder part of the museum’s collection?

Aesthetically, The Flash doesn’t excel, but is still very solid given the limitations of the Game Boy platform. As mentioned above, the cinematic interludes are well-drawn, and The Flash himself has a nice light outline around him which helps separate him from the backgrounds. Other than the train stages, the backgrounds aren’t terribly inspired, and the run-of-the-mill enemies are similarly generic.

As the stages repeat, so do the music tracks. Fortunately, these tunes make decent use of the Game Boy’s limited sound channels and a few are genuinely catchy. Best of all, unlike the SEGA Master System game based on The Flash TV show, the Game Boy version actually uses Danny Elfman’s theme song from the show (which I personally prefer to the Tim Burton Batman theme).

While I’ve seen some comment that The Flash is a difficult game, it really isn’t. However, you do have to put in the effort to master the whole “up to jump” thing. Once you do, Central City is really your oyster. You’re very unlikely to die as a result of losing all of your health, and any deaths you do suffer will probably be due to falling down a pit. Once you’ve got the hang of things, the game can easily be beat in less than an hour. There’s also a password system in the form of the addresses of each stage. Since this allows you to restart at any stage you reach, you essentially have infinite lives as a result.

No, thank YOU Lynn Danehy and J. Sather-Friedman!

The Brave and/or the Bold?

Overall, your mileage on The Flash will depend on two things, the first being your patience. If you can put in the work to adjust to the control scheme, you’re going to have a much better time with the game. The second is how well The Flash scratches your nostalgia itch. The game includes the great theme song and subtle references to specific episodes of the show (i.e. Nightshade), so if you are a fan of the original TV series and are not easily frustrated by adjusting to awkward controls, I can solidly recommend The Flash on Game Boy. If you’re only a casual superhero fan or are hoping for simpler pick-up-and-play retro experience, then The Flash is a tougher sell.

Thanks for reading! To check out more of The Splintering’s Monochrome May content, go here.