Posted on March 15, 2019 by Blake Worrell Leave a comment

On Friday, Cautionary Comics launched a very limited campaign for a “VIP pack” of Ravage – Kill All Men, which includes all four variant the covers of Ravage – KAM # 1 and a sexy Ravage T-shirt featuring cover art by Geebo Vigonte.

What the fuck is Ravage, you ask? Well, calm the fuck down and I’ll tell you all about it since it’s been a while since we’ve covered it here at The Splintering.

“The Ravage – Kill All Men saga take’s place in the mystical land of The Protectori, home to an ancient race of warriors that are sworn to stop the evil of the Lizzarsin, The First Ones, members an ancient cult from a long forgotten race that worship nothing but their lust and the One-Eyed Demon. The evil General Rak of the Lizzarsin has spent an eternity hunting Andramak, The queen of the Protectori and her warriors.

“The “General” and his cult of devil worshiping assasians, attack all those that look, think or feel differently, children, the sick, the elderly Protectori women in the old temples, nothing is held sacred to the snakelike “warrior” cult. The tears of the old feed their dark souls while the cooked bodies of children feed their bellies. All those that are not a part of their hive are an abomination to be ridiculed, attacked and enslaved. Women are simply meant to be used in their dark society.

“Enter two Army veterans who crash in the mystical jungle populated by this lost tribe of toxic Warrior Women that hunt men, enslave them and then kill them. They must escape, submit to survive or die trying!”

Written by Benjamin Henderson and Chuck Dixon and featuring illustrations by Jimbo Salgado and colors by Bryan Arfel Magnaye, Ravage is created to be part of the CautionVerse, a fully developed comic book universe of over 50 original titles.

This will be the last time several of these variant covers are available and supplied are limited to just 250 packs, so don’t miss out if you’re interested. You can grab your VIP pack of Ravage – Kill All Men here. Just want the shirt? It’s also sold separately at the same link…. which is here. 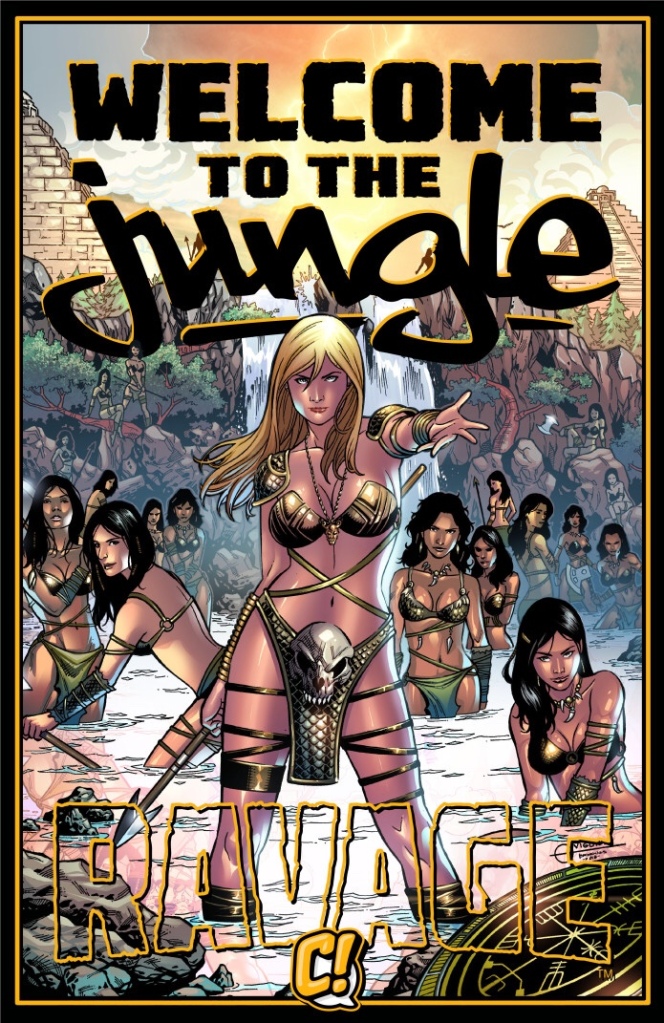