Earlier in March,  writer Michael Derrick launched an Indiegogo campaign for The Abductables, an all-new 52-page one-shot sci-fi/comedy graphic novel about an alien abduction gone wrong written by Derrick and featuring illustrations by Ibai Canales. We got a chance to ask Derrick several questions about the The Abductables campaign, and he was gracious enough to respond. As always, the answers below are represented “as written.” 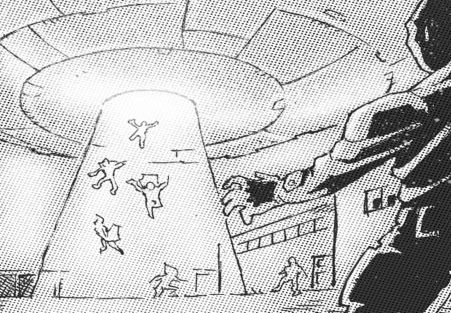 The Splintering (TS): You noted that The Abductables is inspired by The X-Files, but your book is also a comedy. How would you describe the sense of humor in The Abductables? Is it comparable to other recognized franchises?

Michael Derrick (Michael): I’d say the humor in the book is a mix of classic Three Stooges physical comedy and the tongue-in-cheek schlockiness of an ’80s John Carpenter movie. I’ve taken to calling it Mars Attacks! meets Commando, so that should give people some idea of the over-the-top absurdity in store.

TS: Is The Abductables a completely standalone story, or is it only the first part of a larger story?

Michael: It’s designed as a one-shot, completely done-in-one, but during the writing process the idea for a bigger, crazier, more action-oriented sequel popped into my head, so if there’s a reader demand for it I’d love to revisit the ridiculous world set up in The Abductables at some point!

TS: Were you, yourself, ever abducted by the greys? Did they commit horrible, #MeToo-style acts on you? Is this book your way of getting your revenge?

Michael: Not that I’m aware of, but I suppose I’m one session with a hypnotist away from digging up repressed traumatic memories of unwanted alien contact. I always chalked up my obsession with aliens to just being a nerd, but if I ever find a subcutaneous chip implant of unknown origin, that might actually explain a few things…

TS: Do you believe in aliens?

Michael: Short answer? Yes! I’m not the first person to point out that the universe is just a little too infinite to presume that we’re alone in it. As to whether or not our extraterrestrial neighbors are actually little grey weirdos with an obsession with backholes, well, that remains to be seen.

TS: The art on The Abductables Indiegogo page looks deliciously violent. Is the book basically a high-octane bloodbath, or is there a deeper theme behind the story?

Michael: Both! While readers will undoubtedly have their faces melted with page after page of gratuitous human-on-alien violence (and we do encourage our readers to turn off their brain and enjoy some much-needed escapist entertainment!) the wry commentary on our current social trajectory is there for those who choose to look for it. I suppose the subtext of a toxically-masculine male beating up soy-based space perverts kind of speaks for itself.

TS: Your protagonist clearly resembles 80s-era action heroes. Were there any particular actors or characters you had in mind when writing him?

Michael: In the script, I described our main character, The Abductee, as “Arnold Schwarzenegger in his prime”–so throw in a dash of Dolph Lundgren, a hint of Duke Nukem, and a sprinkling of every steroid-infused pro wrestler from the heyday of Hulk Hogan, and voila! We have our hero. I wanted his bulky physique to visually contrast as much as possible with the flabby little bobble-headed Greys he finds himself up against.

TS: Most people think of television or movies when they think of “comedy”. Are there any unique challenges when writing comedy in a graphic novel? Are there any particular advantages?

Michael: I think comics are particularly well-suited for comedy—after all, a joke is all about the timing, and with sequential art you can control the pacing as much as you want with panel layouts and page turns. That being said, I think the book, at least from a comedic aspect, would have been dead in the water if weren’t for Ibai Canales’s humorous cartooning style. While I threw in as many one-liners and sight gags as possible in the script, it’s ultimately the artist who makes or breaks the jokes. I knew I was in good hands when the completed pages Canales sent me never failed to make me laugh. It also helps that we both have a similarly sick sense of humor!

TS: How would you characterize your relationship with artist Ibai Canales?

Michael: Canales is one of the coolest guys in comics, and not just because of that suave Spanish accent of his. He’s incredibly laid back and easy to work with. Our professional relationship was a little unconventional in that I was still writing the script as he was drawing the book, and he’s such a fast artist that he almost caught up with me at some points! Combine his professionalism with the quality and his art and a perfect blending of styles and sensibilities, and I’d say we’re a match made in heaven! I hope this is just the first of many collaborations between us. 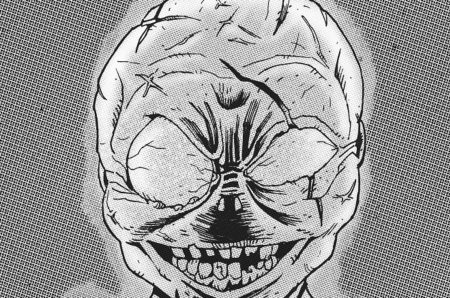 TS: Besides comics, in what other entertainment mediums do you see The Abductables?

Michael: Many have pointed out that the book gives them some serious Doom and the aforementioned Duke Nukem vibes, so I think it would be nothing less than a travesty if this comic never gets adapted into a video game! Imagine a Dead Rising-style beat-em-up shooter where you get to pick off an unending horde of aliens in a variety of creatively violent ways!

TS: At the time of this post, your project is already funded. (Congratulations!) A year from now, how would you describe success for The Abductables?

Michael: Thanks! Now that we’re funded and the book is guaranteed to be in peoples’ hands, the biggest victory will be getting a positive critical reception from the readers. I’m very confident that our backers are going to love this book. Unfortunately, most first-time crowdfunding campaigns fail to meet their goal, so I feel very fortunate that my first venture has been a success. As an up-and-coming creator, I can’t wait to reward the faith put in me by our beloved backers–by delivering the best quality product possible!

TS: If you could see any fictional character abducted by aliens, so that horrible, despicable, #MeToo-style probing was to be inflicted upon them, who would it be?

Michael: Why, I would never wish such a horrible fate upon anyone, fictional or not! (…although I suppose, since Frank Castle is getting up there in years, he might be due for a prostrate exam…but that would probably end up looking a lot like the plot of The Abductables when the aliens tell him to bend over.)

TS: What would you do with the power of the Beyonder?

Michael: You mean after giving myself the power of an infinite bank account? Hmm, I’d probably stay on-brand and send all the Comicsgate characters to Battleworld and have them duke it out for my personal amusement. CyberFrog vs Lonestar vs Red Rooster vs Brutas the Badass vs the Jawbreakers vs Graveyard Shift…The Abductee would beat them all, of course!

We would like to once again thank Michael Derrick for taking the time to answer our questions and to have some fun with us. You can follow Derrick on Twitter here. You can also visit The Abductables Indiegogo page here.