Welcome back to Attack Helicopter Week here at The Splintering! Today, we’re going to feature an old-school shooter close to my heart, Tiger Heli!

When my family first got an NES, it was a Christmas gift from my aunt and uncle. With it, we received three, non-Mario related games: Rad Racer, Hogan’s Alley, and Tiger Heli. Nice spread, right? That said, I’ve always had a bit of a soft spot for Acclaim’s vertically scrolling shooter. Well, Acclaim published it, but Micronics was actually the development team tasked with porting Toaplan’s arcade game to the Nintendo’s 8-bit console. 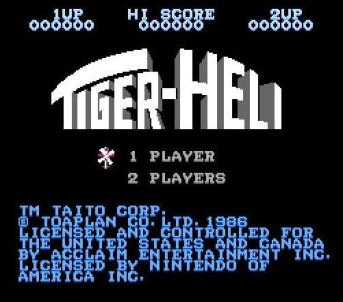 Like most vertical shooters, Tiger Heli isn’t a complicated game. You pilot a military helicopter through four stages of enemy territory, destroying as many enemies as you can while avoiding fire from tanks, artillery turrets, gunboats, and warships. There are no boss fights, per se, though some enemies are certainly tougher than others.

At the beginning of each stage, your helicopter is equipped with two bombs which can be replenished by green power-up boxes. These power-up boxes also drop red and gray “little helis”, which fly at your side and shoot either to the side or straight ahead. Both little helis can absorb a hit for you, too and while the straight-shooting gray little heli may seem like the better upgrade, enemies come at you from so many directions that the red heli is often a lifesaver. Your bombs can also absorb a bullet if they are struck too, which causing them to explode, but it keeps you safe. 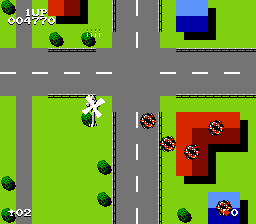 Whenever you destroy something, it leaves behind a bloody, ass-hole shaped pit to hell. That’s canon.

There are four stages in Tiger Heli, which repeat when they are completed. Well, stages 2, 3 and 4 repeat. Stage 1 is never to be seen again. There is a bit of superficial variety in each stage, including a town, dock, farmland and a fortress. There’s nothing terribly ground-breaking about the visuals of any of these stages, but they’re adequate enough. Since the enemies are essentially vehicles and turrets, there’s not much in terms of animation, though there is significant flicker from time to time.

On the audio side, Tiger Heli’s main tune is simple, but catchy, and its tempo matches the spinning of your helicopter blades pretty well. The same track repeats in every stage, so it’s easy to get sick of it if you’re not into it. Fortunately, the music does change when you pick up a little heli. It may not last long, but at least it’s a change of pace.

What are these bridges designed for?

Despite being simple, Tiger Heli is definitely an enjoyable game in small doses, giving credit to its roots an arcade port. It’s not particularly any easier or more difficult than other shoot-em-ups of the 8-bit era, but it would benefit from a few boss battles, or some kind of end state. Still, given how common the game is, Tiger Heli is definitely worth picking up for retro collectors. If you enjoy it, the Tiger Heli series continued with two sequels: Twin Cobra and Twin Cobra II, the former was ported to several consoles, while the latter was ported to SEGA Saturn.

Thanks for reading! To read more of The Splintering’s “Attack Helicopter Week” content, go here.

The Splintering’s Teespring store now has stickers and swag celebrating Attack Helicopter Week! If you like what we do & want to help keep our site 100% free of paid ads, go here!