Posted on April 25, 2019 by The Splintering Staff 2 comments

Chilean artist Mr. Genzoman pointed out on social media that DC Comics has censored the late Michael Turner’s artwork in issues #9 and #10 of Giant-Sized Superman. Without beating around the bush, here are the comparison images. 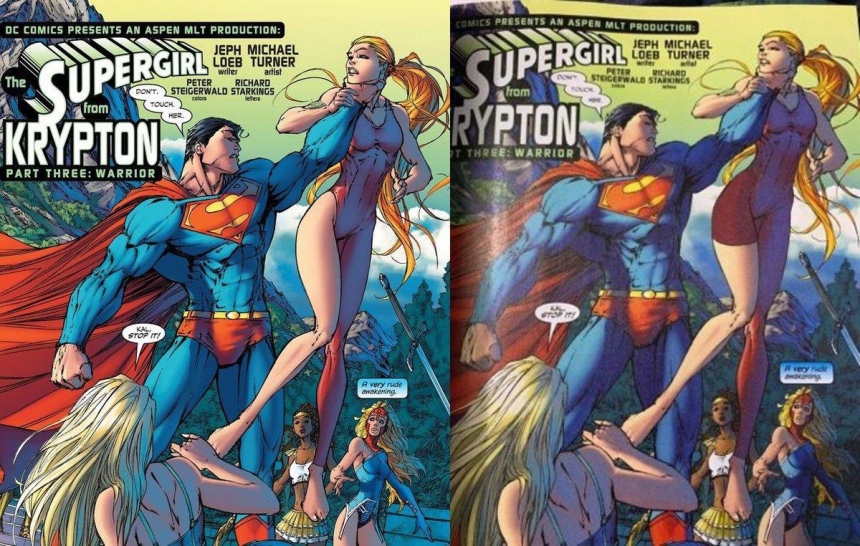 This one isn’t even on the backside, just covering the bikini line for censorship consistency

If it’s not evident from the images, the artwork around both Wonder Woman’s and Artemis’ posteriors has been altered – including removing lines – to make both characters appear more covered up. To editorialize for a moment, these new butts look like ass.

DC Comics launched their Walmart-exclusive “100-page giant” line in 2018, which reprints stories from across various eras of DC Comics history. These particular pages come from Turner’s 2004 run on Batman/Superman.

DC Comics has been specifically censorious of its female characters over the past couple of years, insisting that they cover up. It is still possible that the changes to Turner’s artwork were by Walmart’s insistence, as the 100-page giant books are sold in the kid-friendly aisle near registers. (Though I regularly see The Walking Dead toys in a his same aisle) Either way, if you can’t reprint an artist’s work properly, DC, why would you opt to reprint it in the anthology in the first place?

Michael Turner passed away from bone cancer in 2008. The creator of Fathom, Turner’s work was celebrated during his lifetime and he was highly sought after as an artist who was known for illustrating particularly beautiful women.

We will update this post as necessary if sounds of spinning are reported coming from Turner’s grave.